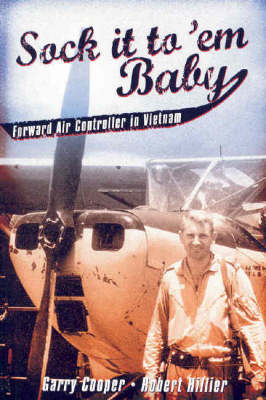 Sock it to 'Em Baby

Description - Sock it to 'Em Baby by Garry Cooper

Garry Cooper is a natural and brilliant pilot with a determination for perfection. He expects only perfection from himself and others. Conflict arose many times through his career when he did not experience perfection from the bureaucracy to which he was subjected.

On posting to the US Army 9th Infantry Division in Vietnam in 1968, he approached his assignments in the same devoted and determined manner and soon became named a legend' by his American peers. General Julian J. Ewell, the Commander of the 9th Infantry Division, and himself a legend from the Siege of Bastogne during WWII, recommended Cooper for the Medal of Honour and the Distinguished Service Cross. Both these are the US highest awards and, as such, required Australian concurrence before being awarded. As Australia was not allowing its personnel to receive US Awards during the Vietnam Conflict, that concurrence was not forthcoming. Although Australian policy regarding foreign awards has since changed, the government is still preventing Cooper from receiving these high profile awards.

The US however, for other actions and without reference to the Australian Government, has awarded Cooper the Silver Star, DFC, Bronze Star, Purple Heart, Air Medal and Army Commendation Medal. In contrast, our Government awarded Cooper an imperial DFC which Cooper refers to as his I was there award'.

Today, Cooper lives in retirement in Queensland. He has been made an honourary member of the various US Army units by the men whose lives he saved and attends their reunions in the USA.

This book is the life story with the emphasis on his experiences in the Vietnam war.

Book Reviews - Sock it to 'Em Baby by Garry Cooper

» Have you read this book? We'd like to know what you think about it - write a review about Sock it to 'Em Baby book by Garry Cooper and you'll earn 50c in Boomerang Bucks loyalty dollars (you must be a Boomerang Books Account Holder - it's free to sign up and there are great benefits!)

Garry Cooper had a distinguished career as a military and commercial pilot, including service in Vietnam flying a Cessna Birddog aircraft. Robert Hillier served in the Royal Australian Navy during the Vietnam War. He has also worked as an engineer, and at the Stock Exchange in Melbourne.

A Preview for this title is currently not available.
More Books By Garry Cooper
View All