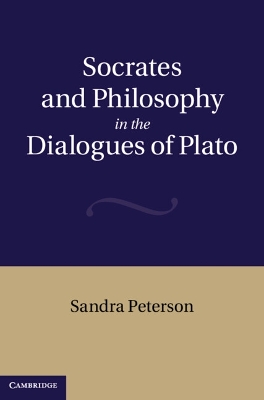 Socrates and Philosophy in the Dialogues of Plato

In Plato's Apology, Socrates says he spent his life examining and questioning people on how best to live, while avowing that he himself knows nothing important. Elsewhere, however, for example in Plato's Republic, Plato's Socrates presents radical and grandiose theses. In this book Sandra Peterson offers a hypothesis which explains the puzzle of Socrates' two contrasting manners. She argues that the apparently confident doctrinal Socrates is in fact conducting the first step of an examination: by eliciting his interlocutors' reactions, his apparently doctrinal lectures reveal what his interlocutors believe is the best way to live. She tests her hypothesis by close reading of passages in the Theaetetus, Republic and Phaedo. Her provocative conclusion, that there is a single Socrates whose conception and practice of philosophy remain the same throughout the dialogues, will be of interest to a wide range of readers in ancient philosophy and classics.

Buy Socrates and Philosophy in the Dialogues of Plato by Sandra Peterson from Australia's Online Independent Bookstore, Boomerang Books. » Have you read this book? We'd like to know what you think about it - write a review about Socrates and Philosophy in the Dialogues of Plato book by Sandra Peterson and you'll earn 50c in Boomerang Bucks loyalty dollars (you must be a Boomerang Books Account Holder - it's free to sign up and there are great benefits!)

Sandra Peterson is Professor of Philosophy at the University of Minnesota, Twin Cities.

A Preview for this title is currently not available.
More Books By Sandra Peterson
View All