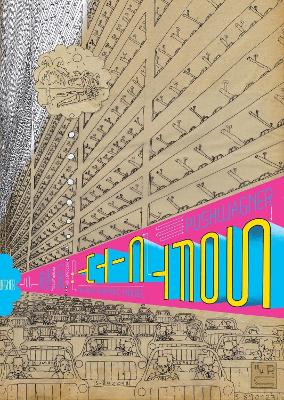 The legendary Norwegian pop artist Pushwagner's scathing comics masterpiece-lost for decades, and never before published in the U.S.-is an epic vision of a single day in a world gone wrong- a brightly smiling, disturbingly familiar dystopia of towering skyscrapers, omnipresent surveillance, and endless distant war. "CLEAN BOMB THE HAPPY-HAPPY WAY," blares the morning paper. "Heil Hilton!" barks an overlord on the news.

Welcome to Soft City. Now don't be late for work.

This NYRC edition is a giant-sized hardcover extra-thick paper and spot-color throughout.

» Have you read this book? We'd like to know what you think about it - write a review about Soft City book by Chris Ware and you'll earn 50c in Boomerang Bucks loyalty dollars (you must be a Boomerang Books Account Holder - it's free to sign up and there are great benefits!)

Pushwagner (Terje Brofos) was born in Oslo, Norway in 1940 to an engineer father and a biochemist mother. After a bus accident at age four left him with a coma and bedridden, his father taught him how to draw. In 1968, he began collaborating with his fellow Norwegian, the author Axel Jensen, on a series of graphic novels and illustrations. In 1969 he began work on his own comics masterpiece, Soft City, the pages of which were left in a suitcase and lost in 1972. In Oslo in 2002, the pages were rediscovered, twenty-five years after they went missing. Soft City was included in the 2008 Berlin Biennial and Pushwagner won the rights back to Soft City in Norwegian court in 2009. In 2012, there was a show of Pushwagner's work at MK Gallery in Milton Keynes.

A Preview for this title is currently not available.
More Books By Chris Ware
View All