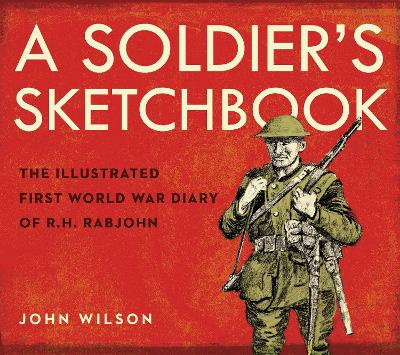 A unique First World War diary, illustrated with more than a hundred stunning pencil sketches, for children learning history and also for adults interested in a new perspective on the War and authentic wartime artefacts.

Russell Rabjohn was just eighteen years old when he joined up to fight in the First World War. In his three years of soldiering, he experienced the highs and lows of army life, from a carefree leave in Paris to the anguish of seeing friends die around him. Like many soldiers, he defied army regulations and recorded everything he saw and felt in a small pocket diary.
Private Rabjohn was a trained artist, and as such he was assigned to draw dugouts, map newly captured trenches, and sketch the graves of his fallen comrades. This allowed him to carry an artist's sketchbook on the battlefield--a freedom he put to good use, drawing everything he saw. Here, in vivid detail, are images of the captured pilot of a downed German biplane; the horrific Flanders mud; a German observation balloon exploding in midair; and the jubilant mood in the streets of Belgium when the Armistice is finally signed. With no surviving veterans of the First World War, Rabjohn's drawings are an unmatched visual record of a lost time.
Award-winning author John Wilson brings his skills as a historian and researcher to bear, carefully curating the diary to provide context and tell the story of Private Rabjohn's war. He has selected each of the diary entries and the accompanying images, and has provided the background that modern-day readers need to understand what a young soldier went through a century ago. The result is a wonderfully detailed and dramatic account of the war as seen through an artist's eyes.

» Have you read this book? We'd like to know what you think about it - write a review about Soldier's Sketchbook book by John Wilson and you'll earn 50c in Boomerang Bucks loyalty dollars (you must be a Boomerang Books Account Holder - it's free to sign up and there are great benefits!)

JOHN WILSON was born in Edinburgh, Scotland, and moved to Canada after university to work as a geologist. Eventually he began to write full time, and today he is one of Canada's best-known authors of historical fiction and nonfiction for kids, teens, and adults. He's published more than forty books, including several novels set during the First World War- Wings of War, Dark Terror, And in the Morning and Shot at Dawn. His books have won or been shortlisted for numerous prizes, including the Governor General's Literary Award for Children's Text, the Geoffrey Bilson Award for Historical Fiction for Young People, the Red Maple and White Pine Awards, the Hackmatack Children's Choice Award, the Sheila A. Egoff Children's Literature Prize, and the prestigious Norma Fleck Award for Canadian Children's Non-Fiction. John Wilson lives in Lantzville on Vancouver Island.

A Preview for this title is currently not available.
More Books By John Wilson
View All

Preface to the philosophy of education (International Library of the Philosophy of Education Volume 24)
$98.00 $98.99

The Elements of Punctuation: With Rules on the Use of Capital Letters: Being an Abridgement of the Treatise on English Punctuation.: Prepared for Schools
$88.06 $97.84

Scripture Proofs and Scriptural Illustrations of Unitarianism: With an Examination of the Alleged Biblical Evidence for the Doctrine of a Triune God, the Proper Deity of Christ and the Divine Personality of the Holy Spirt Distinct from the Father
$99.07 $110.08