The acclaimed debut novel from Alice Oseman, the author of the 2021 YA Book Prize winning Loveless. Solitaire features the characters that inspired the beloved webcomic and graphic novel series Heartstopper - soon to be a major Netflix series.

"The Catcher in the Rye for the digital age" The Times
My name is Tori Spring. I like to sleep and I like to blog. Last year - before all that stuff with Charlie and before I had to face the harsh realities of A-Levels and university applications and the fact that one day I really will have to start talking to people - I had friends. Things were very different, I guess, but that's all over now.

I don't know what Solitaire are trying to do, and I don't care about Michael Holden.
I really don't.


Other Editions - Solitaire by Alice Oseman 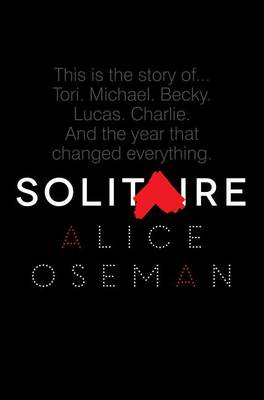 » Have you read this book? We'd like to know what you think about it - write a review about Solitaire book by Alice Oseman and you'll earn 50c in Boomerang Bucks loyalty dollars (you must be a Boomerang Books Account Holder - it's free to sign up and there are great benefits!)

Alice Oseman is an author and also a student, currently attending Durham University reading English. Her debut novel, Solitaire was published to critical acclaim - "The Catcher in the Rye for the digital age" The Times. Like her characters, Alice was once a sarcastic teenager who spent all of her time on internet. Now she is a sarcastic 20-year-old who spends all of her time on the internet. Alice is from Rochester, Kent. She is active on Twitter and Tumblr - and her writing has been significantly inspired by behavioural trends on Tumblr. Follow Alice Oseman on Twitter: @AliceOseman Follow Alice on Tumblr: www.chronicintrovert.tumblr.com

Aristotle and Dante Dive Into the Waters of the World
Benjamin Alire Saenz
$14.39 $17.99