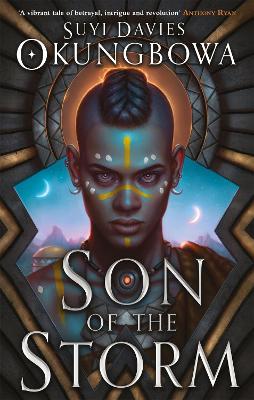 Son of the Storm

Description - Son of the Storm by Suyi Davies Okungbowa

Award-winning author Suyi Davies Okungbowa begins a thrilling new epic fantasy series of violent conquest, buried histories and forbidden magic. In the city of Bassa, Danso is a clever scholar on the cusp of achieving greatness-only he doesn't want it. Instead, he prefers to chase forbidden stories about what lies outside the city walls. The Bassai elite claim there is nothing of interest. The city's immigrants are sworn to secrecy.But when Danso stumbles across a warrior wielding magic that shouldn't exist, he's put on a collision course with Bassa's darkest secrets. Drawn into the city's hidden history, he sets out on a journey beyond its borders. But the chaos left in the wake of his discovery threatens to destroy the empire.'Everything I love to see in a fantasy story: masterful, fully-realised worldbuilding, morally complex characters, thoughtful and piercing interrogations of power, privilege, and all the facets of human nature. Damn good stuff!' - Jenn Lyons'A mesmerising coming of age tale set against a thrilling, fantastical adventure that introduces and beguiling new world . . . and then rips apart everything you think you know' - S. A. Chakraborty'An elaborately plotted tale of ancient magics and world-shattering politics. I, like many others, will be impatiently waiting for the next instalment!' - Andrea Stewart'One of the most promising new voices in the growing coterie of African SFF writers' - Wired

Book Reviews - Son of the Storm by Suyi Davies Okungbowa

» Have you read this book? We'd like to know what you think about it - write a review about Son of the Storm book by Suyi Davies Okungbowa and you'll earn 50c in Boomerang Bucks loyalty dollars (you must be a Boomerang Books Account Holder - it's free to sign up and there are great benefits!)


A Preview for this title is currently not available.
More Books By Suyi Davies Okungbowa
View All