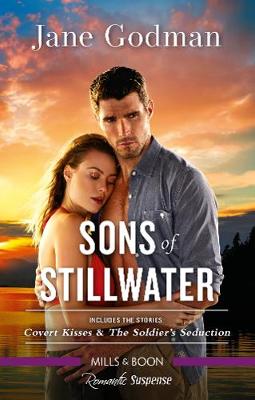 Coincidence? The beauty who washes up on Mayor Cameron Delaney's private beach eerily resembles his dead girlfriend, Carla. But Laurie Carter, Carla's lookalike cousin, is actually an undercover detective. She's on the job, investigating Cameron's connection to a human trafficking ring. Laurie knows she must keep her cover - but she's struggling to deceive the man she finds irresistible...

When Cameron discovers why Laurie is in town, he's furious to realise he's being framed - and stunned at his sudden feelings for the lovely agent. But as they uncover the traffickers, a savage serial killer targets Laurie. Can Cameron save the life of the woman he's come to care for...and unmask the threat haunting his family and Stillwater?

After a warzone bomb nearly destroyed Bryce Delaney, he's worked hard to hide his scars. Back in his Wyoming hometown, he can pretend the nightmares don't exist. But when a secretive, beautiful new face in town disappears, Bryce's protective instincts put him on the front line again.

Wanted for murder and on the run under an alias, former A-list actress Steffi Grantham can't return to her life until she clears her name. It's her boss Bryce to the rescue, but desire ties them together, and she's forced to make a choice that could cost them both. Trusting the wrong man once before almost stole her freedom. Now it might take her life.

» Have you read this book? We'd like to know what you think about it - write a review about Sons of Stillwater/Covert Kisses/The Soldier's Seduction book by Jane Godman and you'll earn 50c in Boomerang Bucks loyalty dollars (you must be a Boomerang Books Account Holder - it's free to sign up and there are great benefits!)


A Preview for this title is currently not available.
More Books By Jane Godman
View All