Sons of the Reich

Description - Sons of the Reich by Michael Reynolds

The history of II SS Panzer Corps is a short and violent one. This meticulously researched book documents the actions of the 9th and 10th SS Panzer Divisions from activation until October 1944, and the 2nd and 9th SS Divisions from December 1944 until the end of the war. This period encompasses the Battle of Normandy, the escape from the Falaise Pocket, the MARKET GARDEN episode and Hitler's last great offensive in the West, the Battle of the Bulge. Sons of the Reich also dismantles the myth that the Waffen SS were a volunteer force of brainwashed thugs and fanatics, in fact II SS Panzer Division were ordinary conscripts, whose tenacity (most notably at Arnhem in September 1944) was admired by friend and foe alike. AUTHOR: Since retiring from a successful military career in 1986, Major General Mike Reynolds has become a highly respected military historian. He is the author of five other critically acclaimed books, printed in numerous languages.

Other Editions - Sons of the Reich by Michael Reynolds 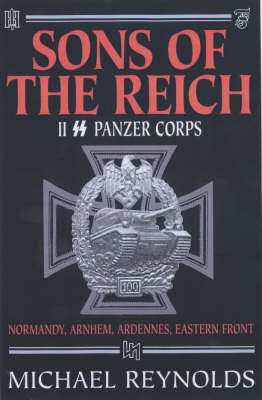 Book Reviews - Sons of the Reich by Michael Reynolds

» Have you read this book? We'd like to know what you think about it - write a review about Sons of the Reich book by Michael Reynolds and you'll earn 50c in Boomerang Bucks loyalty dollars (you must be a Boomerang Books Account Holder - it's free to sign up and there are great benefits!)


A Preview for this title is currently not available.
More Books By Michael Reynolds
View All