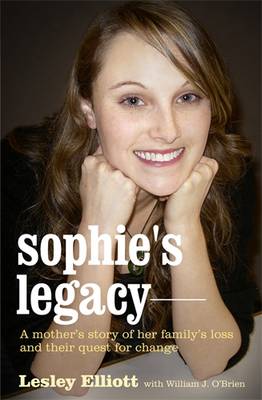 Sophie Elliott had everything to live for, until her ex boyfriend decided otherwise. The gripping mother's tale of a murder that shocked New Zealand.Sophie Elliott had good looks, intelligence, friends, a loving family, a degree under her belt and a new job at the Treasury in Wellington. And then, the day before she left Dunedin to take up that job, she was brutally stabbed to death in her own home by her former boyfriend, Clayton Weatherston. He was much older and one of her lecturers at the university. When the public came to take his measure at his high-profile trial in 2010, his narcissistic, manipulative personality stunned the nation. The case also changed the New Zealand legal system's approach to the defence of provocation. Sophie's mother Lesley has weathered the horror of her daughter's death, and the gruelling process of the trial, to set up a foundation to help young women identify when they might be in an abusive relationship that puts them in harm's way - as Sophie was, unbeknownst to her and her family - and how to seek help. This book is Lesley's tribute to a daughter she adored, her harrowing account of a tragedy no family should ever have to endure, and her inspiring decision to make sure that Sophie's legacy endures. It's also her challenge to the justice system on behalf of victims.

» Have you read this book? We'd like to know what you think about it - write a review about Sophie's Legacy book by William J. O'Brien and you'll earn 50c in Boomerang Bucks loyalty dollars (you must be a Boomerang Books Account Holder - it's free to sign up and there are great benefits!)

W. J. (Bill) O Brien, a retired former senior police officer, is the author of over 20 books, including one on the Aramoana shooting tragedy that subsequently became the basis for the film Out of the Blue. He co-authored the bestselling Sophie s Legacy with Lesley Elliott, her account of the murder of her daughter at the hands of ex-boyfriend, Clayton Weatherston.His prolonged trial and attempts to blame Sophie for her own death created huge public revulsion and outrage. The case caused further controversy with the use of the defence of provocation leading to call for legal reform. Royalties from the book go towards funding the Sophie Elliott Foundation, which has been established to resource a school-based programme to better prepare young people to look after themselves and avoid abusive relationships. Bill is now a trustee on the Foundation and manages Lesley s nationwide speaking engagements in a voluntary capacity. He was a finalist in the Junior Fiction category of the New Zealand Post Children s Book Awards of 2007, and soon after was appointed Children s Writer in Residence at the University of Otago s College of Education. Lesley Elliott wrote

A Preview for this title is currently not available.
More Books By William J. O'Brien
View All