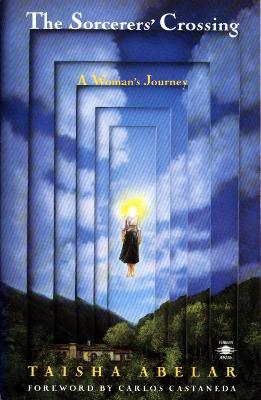 Some twenty years ago, anthropologist Carlos Castaneda electrified millions of readers by describing his initiation - under the tutelage of the Yaqui Indian brujo Don Juan - into an alternate reality. Now Taisha Ablear, who was taught by the female members of Don Juan's group, recounts her own "crossing" in this arresting book.While traveling in Mexico, Abelar became involved with a group of sorcerers and began a rigorous physical and mental training process designed to enable her to breach the limits of ordinary perception. The Sorcerers' Crossing details that process, giving us a highly practical sense of the responsibilities and perils that face a woman sorcerer. Abelar's enthralling story in invaluable as a virtual "sorcerers' manual," as anthropology, and as a provocative work of women's spirituality.

» Have you read this book? We'd like to know what you think about it - write a review about Sorcerer'S Crossing book by Taisha Abelar and you'll earn 50c in Boomerang Bucks loyalty dollars (you must be a Boomerang Books Account Holder - it's free to sign up and there are great benefits!)

Taisha Abelar is an American writer and anthropologist, and a former associate of the shaman and author Carlos Castaneda, also known as Don Juan. She wrote about her experiences in The Sorcerer's Crossing: A Woman's Journey. Carlos Castaneda was a graduate student in anthropology at the University of California, Los Angeles, gathering information on various medicinal herbs used by the Indians in Sonora, Mexico, when he met the old Yaqui Indian Don Juan. His first book, The Teachings of Don Juan, was the story of the first period the two men spent together as master and pupil. This was followed by the other volumes in the series, A Separate Reality, Journey to Ixtlan, Tales of Power, The Second Ring of Power, and The Eagle's Gift, all of which are published by Penguin. He also wrote the Art of Dreaming (1993).