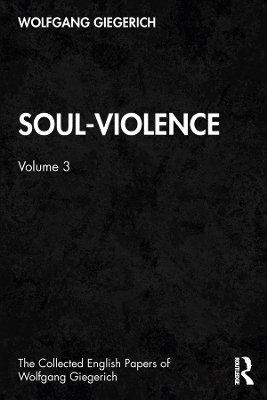 "All steps forward in the improvement of the human psyche have been paid for by blood." Further to this statement from C. G. Jung, Wolfgang Giegerich's third volume of Collected English Papers shows that the soul is not merely the innocent recipient or victim of violence: it also produces itself through violent deeds and expresses itself through violent acts. Beginning in primordial times with the ritual spilling of blood in animal and human sacrifice, a light was kindled within the darkness of what would otherwise have been mere biological existence, the light of consciousness, mindedness, and "the soul." And following upon this, in the clearance thus created, the soul attained new statuses of itself on the historic battlefields of war and revolution. First-order killings gave way to second-order killings, the killings of metaphysics and philosophy. Turning around upon itself (even as it violently engaged those adversarial others through whom its self-relation was mediated) the soul learned to self-critically cut into itself. It was in this way, as the inwardness of the blood that was paid out for it, that psychology emerged. Topics include ritual slaughter as primordial soul-making, shadow integration and the rise of psychology, blood-brotherhood and blood-revenge, the alchemy of history, Kafka's "In the Penal Colony," child sacrifice, Islamic terrorism, and the animus as negation with special reference to Bluebeard. » Have you read this book? We'd like to know what you think about it - write a review about Soul-Violence: Volume 3 book by Wolfgang Giegerich and you'll earn 50c in Boomerang Bucks loyalty dollars (you must be a Boomerang Books Account Holder - it's free to sign up and there are great benefits!)


A Preview for this title is currently not available.
More Books By Wolfgang Giegerich
View All

The Neurosis of Psychology: Primary Papers Towards a Critical Psychology, Volume 1
$62.36 $62.99