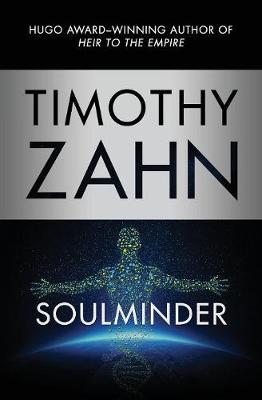 Science redefines life and death in this novel by the #1 New York Times-bestselling, Hugo Award-winning author.

Dr. Adrian Sommers's world was destroyed in a split second of distracted driving. The accident left his son wavering between life and death. When the end came, Sommers's family was torn apart, but the tragedy gave him hope and an obsessive mission: to forestall death through science and technology.

Years of experimentation lead Sommers to develop Soulminder, a device capable of capturing a dying person's life essence and holding it safely in stasis while physicians heal the body from injury or disease. But there are those who recognize Soulminder's true potential: body-swapping, obstruction of justice, extortion, and perhaps even immortality.

As Sommers struggles to retain control over the use of his invention against corrupt and dangerous factions, he must question his own moral judgment and motives in creating Soulminder and determine if humanity has earned the right to harness the power of life and death. From the author of Star Wars: Heir to the Empire, this is not only a tale of a father's desperate love for his son but also "an intriguing thought experiment. . . . Those who enjoy deep philosophical questions will appreciate being left with much to ponder" (Publishers Weekly).

» Have you read this book? We'd like to know what you think about it - write a review about Soulminder book by Timothy Zahn and you'll earn 50c in Boomerang Bucks loyalty dollars (you must be a Boomerang Books Account Holder - it's free to sign up and there are great benefits!)

Timothy Zahn is a New York Times-bestselling science fiction author of more than forty novels, as well as many novellas and short stories. Best known for his contributions to the expanded Star Wars universe of books, including the Thrawn trilogy, Zahn won a 1984 Hugo Award for his novella "Cascade Point." He also wrote the Cobra series, the Blackcollar series, the Quadrail series, and the young adult Dragonback series, whose first novel, Dragon and Thief, was an ALA Best Book for Young Adults. Zahn currently resides in Oregon with his family.