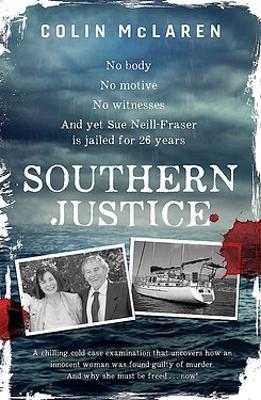 Who really murdered Bob Chappell? Veteran ex-detective and author of JFK: The Smoking Gun, Colin McLaren, uncovers disturbing new evidence that an innocent woman is in jail.Daybreak, Sandy Bay, Hobart, 27 January 2009. A yacht, the Four Winds, is seen listing low to the waterline. When police board the sinking vessel there is no sign of the owners, Bob Chappell and Sue Neill-Fraser but, disturbingly, they find blood and a knife.Bob Chappell is never seen again. The blood spatter leads police to the conclusion that he has been murdered. Remarkably, Sue Neill-Fraser is arrested, found guilty and sentenced to 26 years' imprisonment.May, 2016. Bestselling true-crime author Colin McLaren probes the notorious cold case that grips Australia. What he discovers shocks him. No body, no motive, no witnesses, a puddle of unexplained DNA liquid, undisclosed police documents, insubstantial scenarios - all lead him to believe Sue Neill-Fraser was wrongly convicted. He is not alone, as lawyers line up to help her.August 2017. Sue Neill-Fraser remains in prison. When questions are asked of her conviction, new witnesses are charged, including a lawyer, and unbearable pressure is applied until, fearing for his own liberty, Colin McLaren flees the country. Southern Justice lays out the evidence that should force a Royal Commission to reopen the case and exonerate an innocent woman.The guilty are still out there!'. . . the worst miscarriage of justice in Australia's history' Robert Richter QC

» Have you read this book? We'd like to know what you think about it - write a review about Southern Justice book by Colin McLaren and you'll earn 50c in Boomerang Bucks loyalty dollars (you must be a Boomerang Books Account Holder - it's free to sign up and there are great benefits!)


A Preview for this title is currently not available.
More Books By Colin McLaren
View All