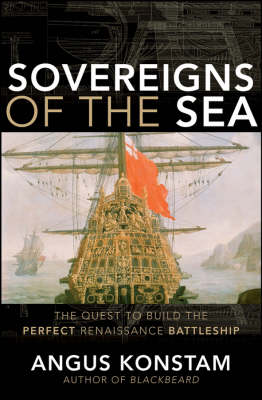 Sovereigns of the Sea

The Quest to Build the Perfect Renaissance Battleship

Description - Sovereigns of the Sea by Angus Konstam

Savor the story of the ultimate warship in Sovereigns of the Sea: The Quest to Build the Perfect Renaissance Battleship, which chronicles the history of Sovereign of the Seas, an immensely powerful floating fortress. You will enjoy this gripping tale of an arms race that created and ruined empires, changed the map of the world, and led Europe out of the Renaissance and into the Modern age. Understand how the Sovereign of the Seas became the model for a whole new generation of warships that would dominate naval warfare until the advent of steam power.

Book Reviews - Sovereigns of the Sea by Angus Konstam

» Have you read this book? We'd like to know what you think about it - write a review about Sovereigns of the Sea book by Angus Konstam and you'll earn 50c in Boomerang Bucks loyalty dollars (you must be a Boomerang Books Account Holder - it's free to sign up and there are great benefits!)

Angus Konstam is a widely published authorwho has written several books on piracy,including Blackbeard: America's Most NotoriousPirate, The History of Pirates, and Piracy: The Complete History. A former naval officer and museum professional, he worked as a curator of weapons in the Tower of London and as the chief curator in the Mel Fisher Maritime Museum in Key West, Florida, before becoming a full-time historian and writer. An expert on weapons, shipwrecks, and piracy, he has advised several underwater archaeological groups and appears regularly on both the Discovery and the History channels. He lives in Edinburgh, Scotland.