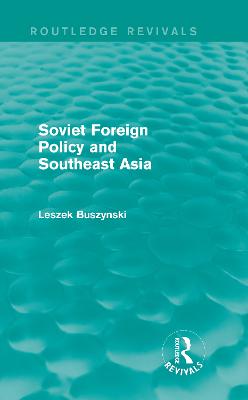 This book focuses on the activity of the Soviet Union in Southeast Asia and the effects of Soviet policy on the region from 1969 to the time of first publication in 1986. In particular, Leszek Buszynski examines the rivalry between the Soviet Union and China, Soviet presence in Vietnam, and the responsive efforts of surrounding regions towards collective security. U.S. policy in the region is a key consideration, particularly in terms of American attempts to placate China and encourage Japan to assist in the defence of the region. With a concluding assessment of regional trends and possible outcomes, this is an important and valuable work for students and scholars with an interest in the history and politics of international diplomacy in Southeast Asia. » Have you read this book? We'd like to know what you think about it - write a review about Soviet Foreign Policy and Southeast Asia book by Leszek Buszynski and you'll earn 50c in Boomerang Bucks loyalty dollars (you must be a Boomerang Books Account Holder - it's free to sign up and there are great benefits!)


A Preview for this title is currently not available.
More Books By Leszek Buszynski
View All

The South China Sea: From a Regional Maritime Dispute to Geo-Strategic Competition
$249.48 $252.00