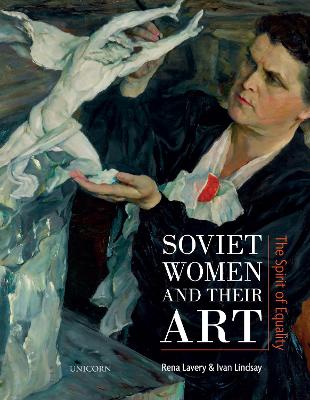 Soviet Women and their Art: The Spirit of Equality

Description - Soviet Women and their Art: The Spirit of Equality by Ivan Lindsay

This new publication provides a cross-disciplinary examination of early 20th century feminism and gender politics in the Soviet Union in relation to the rise and development of prominent female artists and sculptors. The book covers the period from the end of WWI and pre-Revolutionary Russia to Gorbachev's perestroika and the dissolution of the Soviet Union. It consists of a collection of essays by leading specialists in the field, academics and independent scholars, covering major events in Soviet history, art and culture and exploring the role of women in society, the representation of women in art, and discussing the oeuvre and artistic practices of Soviet female artists.

The book initially examines the emergence of prominent female artists, leaders of the Avant-garde movement in the 1910s-1920s. Following this, a chapter delves into Stalin's era which saw only a handful of outstanding female artists such as V. Mukhina rising to the top of the cultural artistic elite. Many of the female artists and sculptors were driven into obscurity and mainly worked as stage designers or book illustrators. Then the book focuses on the arrival of Khrushchev's Thaw which temporarily and partially relieved the oppressive role that the Communist Party played in all domains of life in the Soviet Union and in the creative process in particular. This led to the emergence of Nonconformists, a new wave of artists, and quite a few of them were women.

Buy Soviet Women and their Art: The Spirit of Equality by Ivan Lindsay from Australia's Online Independent Bookstore, Boomerang Books.

Book Reviews - Soviet Women and their Art: The Spirit of Equality by Ivan Lindsay

» Have you read this book? We'd like to know what you think about it - write a review about Soviet Women and their Art: The Spirit of Equality book by Ivan Lindsay and you'll earn 50c in Boomerang Bucks loyalty dollars (you must be a Boomerang Books Account Holder - it's free to sign up and there are great benefits!)


A Preview for this title is currently not available.
More Books By Ivan Lindsay
View All