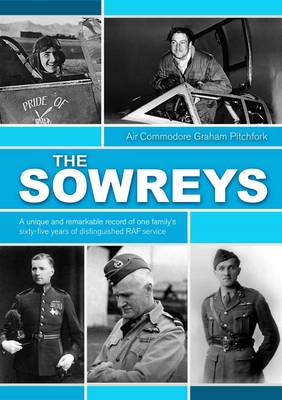 Description - The Sowreys by Graham Pitchfork

A fascinating look into the extraordinary history of the Sowrey family; an RAF dynasty whose service spans the first sixty-five years of the RAF's existence. Members fought in both world wars and five of the Sowreys were awarded the Air Force Cross, amongst their other numerous decorations. Three brothers, John, Fred and William, all served in World War I with distinction before service in Iraq and the Middle East. The next generation of Sowreys started at Cranwell in 1938; one was killed in action in the Western Desert but John jnr and Freddie served throughout, on fighter operations in the desert and north-west Europe, whilst a sister served in the WAAF. Also during World War II Air Cdre William Sowrey served as an AOC in the often-forgotten campaign in East Africa. John Sowrey went on to become a test pilot in the halcyon days of 1950-fighters and Freddie served in fighters before taking up more senior policy and diplomatic appointments during the Cold War. Their diverse individual careers and experiences worldwide provide great scope for study into the history and development of the RAF from World War I to the later stages of the Cold War.

» Have you read this book? We'd like to know what you think about it - write a review about Sowreys book by Graham Pitchfork and you'll earn 50c in Boomerang Bucks loyalty dollars (you must be a Boomerang Books Account Holder - it's free to sign up and there are great benefits!)

The author, Graham Pitchfork, spent thirty-six years in the RAF, as a navigator, and commanded a Buccaneer squadron, Director of Air Warfare and, before retiring in 1995, was a Director of Military Intelligence at the Ministry of Defence. He has collaborated with Air Marshal Sir Freddie Sowrey, founder of the RAF Historical Society, gaining access to valuable records and a superb collection of photographs in order to bring to life an extremely engaging and enlightening tale of this most brave and unique of families.

A Preview for this title is currently not available.
More Books By Graham Pitchfork
View All

Beaufighter Boys: True Tales from those who flew Bristol's Mighty Twin
No Stock on Hand, Supplier Has No Due Date for Supply.
$49.49 $54.99