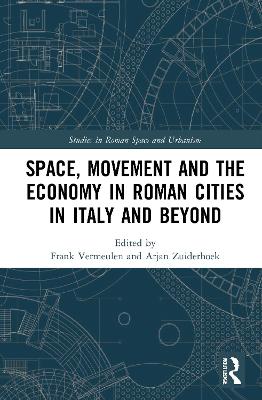 Space, Movement and the Economy in Roman Cities in Italy and Beyond

Description - Space, Movement and the Economy in Roman Cities in Italy and Beyond by Frank Vermeulen

How were space and movement in Roman cities affected by economic life? What can the study of Roman urban landscapes tell us about the nature of the Roman economy? These are the central questions addressed in this volume.

While there exist many studies of Roman urban space and of the Roman economy, rarely have the two topics been investigated together in a sustained fashion. In this volume, an international team of archaeologists and historians focuses explicitly on the economics of space and mobility in Roman Imperial cities, in both Italy and the provinces, east and west. Employing many kinds of material and written evidence and a wide range of methodologies, the contributors cast new light both on well-known and on less-explored sites. With their direct focus on the everyday economic uses of urban spaces and the movements through them, the contributors offer a fresh and innovative perspective on the workings of Roman urban economies and on the debates concerning space in the Roman world.

This volume will be of interest to archaeologists and historians, both those studying the Greco-Roman world and those focusing on urban economic space in other periods and places as well as to other scholars studying premodern urbanism and urban economies.

Buy Space, Movement and the Economy in Roman Cities in Italy and Beyond by Frank Vermeulen from Australia's Online Independent Bookstore, Boomerang Books.

Book Reviews - Space, Movement and the Economy in Roman Cities in Italy and Beyond by Frank Vermeulen

» Have you read this book? We'd like to know what you think about it - write a review about Space, Movement and the Economy in Roman Cities in Italy and Beyond book by Frank Vermeulen and you'll earn 50c in Boomerang Bucks loyalty dollars (you must be a Boomerang Books Account Holder - it's free to sign up and there are great benefits!)


A Preview for this title is currently not available.
More Books By Frank Vermeulen
View All