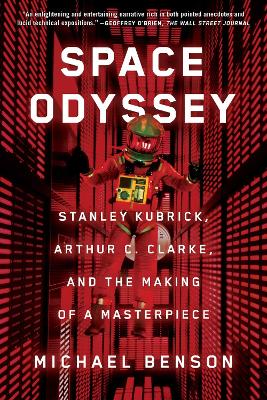 Space Odyssey: Stanley Kubrick, Arthur C. Clarke, and the Making of a Masterpiece

The definitive story of the making of 2001: A Space Odyssey, acclaimed today as one of the greatest films ever made, and of director Stanley Kubrick and writer Arthur C. Clarke-"a tremendous explication of a tremendous film....Breathtaking" (The Washington Post).

Fifty years ago a strikingly original film had its premiere. Still acclaimed as one of the most remarkable and important motion pictures ever made, 2001: A Space Odyssey depicted the first contacts between humanity and extraterrestrial intelligence. The movie was the product of a singular collaboration between Stanley Kubrick and science fiction visionary Arthur C. Clarke. Fresh off the success of his cold war satire Dr. Strangelove, Kubrick wanted to make the first truly first-rate science fiction film. Drawing from Clarke's ideas and with one of the author's short stories as the initial inspiration, their bold vision benefited from pioneering special effects that still look extraordinary today, even in an age of computer-generated images.

In Space Odyssey, author, artist, and award-winning filmmaker Michael Benson "delivers expert inside stuff" (San Francisco Chronicle) from his extensive research of Kubrick's and Clarke's archives. He has had the cooperation of Kubrick's widow, Christiane, and interviewed most of the key people still alive who worked on the film. Drawing also from other previously unpublished interviews, Space Odyssey provides a 360-degree view of the film from its genesis to its legacy, including many previously untold stories. And it features dozens of photos from the making of the film, most never previously published.

"At last! The dense, intense, detailed, and authoritative saga of the making of the greatest motion picture I've ever seen...Michael Benson has done the Cosmos a great service" (Academy Award-winning actor Tom Hanks).


Other Editions - Space Odyssey: Stanley Kubrick, Arthur C. Clarke, and the Making of a Masterpiece by Michael Benson » Have you read this book? We'd like to know what you think about it - write a review about Space Odyssey: Stanley Kubrick, Arthur C. Clarke, and the Making of a Masterpiece book by Michael Benson and you'll earn 50c in Boomerang Bucks loyalty dollars (you must be a Boomerang Books Account Holder - it's free to sign up and there are great benefits!)


A Preview for this title is currently not available.
More Books By Michael Benson
View All