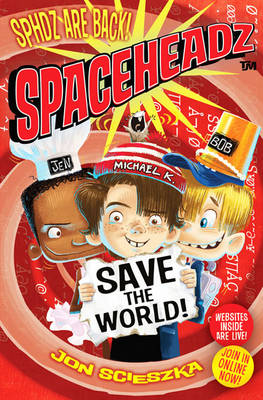 Description - Spaceheadz Save the World by Jon Scieszka

The campaign is going well. The SPHDZ word is getting out. 1000's of kids have signed up to say they are SPHDZ. But things haven't got any easier for Michael K. The SPHDZ are still trying to blend in to our Earth culture, but not very successfully. They're still mixing up cartoon plots, holidays and commercials. This makes it especially hard for Michael K to both hide the SPHDZ from Agent Umber and accomplish the SPHDZ Mission and so he's forced to enlist the help of his classmates, Venus and TJ. And when Michael K and the SPHDZ are given the assignment to direct the first years in their school play... things are bound to get crazier... quickly.

Book Reviews - Spaceheadz Save the World by Jon Scieszka

» Have you read this book? We'd like to know what you think about it - write a review about Spaceheadz Save the World book by Jon Scieszka and you'll earn 50c in Boomerang Bucks loyalty dollars (you must be a Boomerang Books Account Holder - it's free to sign up and there are great benefits!)

Jon Scieszka is the first National Ambassador for Young People's Literature in the USA, named by the Library of Congress. He is the author of some of the best known and funniest books written for children and is the creator of the Trucktown series. Jon is a former school teacher and an avid promoter of literacy - particularly for boys. His website www.guyssread.com focuses on his national campaign. Jon lives with his family in Brooklyn, NY. Shane Prigmore is currently a development and story artist at Dreamworks Feature Animation and he was a principle character designer on the stop motion feature CORALINE. Shane lives in California.