Michael K has just started at his new school, but as if his very first day wasn't going to be hard enough, he's been forced to make friends with the two other new kids who are really weird.

But, as Michael K soon finds out, Bob and Jennifer are not actually weird kids, they're aliens! Real aliens who have invaded our planet with one very important mission to complete: to convince 3,400,001 kids to BE SPHDZ too, or the Earth gets turned off! But with a hamster as their leader, "kids" who talk like walking advertisements and Michael K as their first convert, will the SPHDZ be able to keep their cover and complete their mission?

Other Editions - Spaceheadz by Jon Scieszka 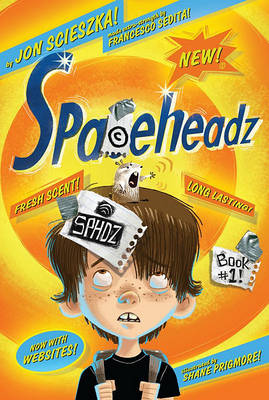 View all editions of Spaceheadz by Jon Scieszka

» Have you read this book? We'd like to know what you think about it - write a review about Spaceheadz book by Jon Scieszka and you'll earn 50c in Boomerang Bucks loyalty dollars (you must be a Boomerang Books Account Holder - it's free to sign up and there are great benefits!)

Jon Scieszka is the first National Ambassador for Young People's Literature in the USA, named by the Library of Congress. He is the author of some of the best known and funniest books written for children and is the creator of the Trucktown series. Jon is a former school teacher and an avid promoter of literacy - particularly for boys. His website www.guyssread.com focuses on his national campaign. Jon lives with his family in Brooklyn, NY. Francesco Sedita studied writing at the Gallatin School of New York University. While at Gallatin, he was a Writing Fellow for Saturday Night Live and upon graduation he wrote and directed a show that ran Off-Off-Broadway for 5 years. Francesco is currently the Creative Director at Scholastic USA and lives in Brooklyn, NY. Shane Prigmore is currently a development and story artist at Dreamworks Feature Animation and he was a principle character designer on the stop motion feature CORALINE. Shane lives in California.