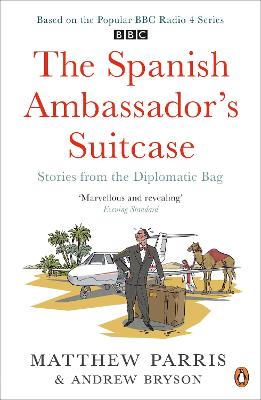 Stories from the Diplomatic Bag

Heard the one about the Spanish Ambassador who arrived in the scorching Saharan desert fully suited and with a mysteriously enormous suitcase? Or the horse they gave Prime Minister John Major in Turkmenistan - which hapless embassy officials had to rescue from the clutches of the Moscow railway? These and other 'funnies', as they are known in Whitehall, are included in Matthew Parris and and Andrew Bryson's glorious new volume of not so diplomatic writing, which accompanies a new BBC Radio 4 series is a follow up to their acclaimed collection of ambassadors' final despatches, Parting Shots.
Drawn from Freedom of Information requests and previously overlooked Valedictories these startling despatches throw a revealing light on how the British have viewed the world - and, unwittingly perhaps, on how the world has viewed the British.
Praise for Parting Shots-
'Parting Shots is unbuttoned, indiscreet and very funny' Yorkshire Post
'Fascinating, if sometimes uncomfortable, reading' Financial Times
'Very funny' Guardian

After working in the Foreign Office then serving as a Conservative MP, Matthew Parris joined The Times in 1988. He writes two weekly columns for The Times and one for the Spectator, and in 2011 won the Best Columnist Award at the British Press awards. His acclaimed autobiography Chance Witness was published by Penguin in 2003. He is a frequent broadcaster.
Andrew Bryson is a radio journalist working in the BBC's Business and Economic Unit. He frequently works as a producer on Radio 4's Today programme and on Radio 5 Live.

» Have you read this book? We'd like to know what you think about it - write a review about Spanish Ambassador's Suitcase book by Matthew Parris and you'll earn 50c in Boomerang Bucks loyalty dollars (you must be a Boomerang Books Account Holder - it's free to sign up and there are great benefits!)

Matthew Parris worked for the Foreign Office before serving as an MP. He now writes as a columnist for The Times and the Spectator, and in 2011 won the Best Columnist award at the British Press Awards. His acclaimed biography Chance Witness was published in Penguin in 2003. Andrew Bryson is a radio journalist working in the BBC's Business and Economics Unit. He frequently produces Radio 4's Today programme and also programmes for Radio 5 Live. Their first volume of diplomats' despatches, Parting Shots, is published by Penguin.

A Preview for this title is currently not available.
More Books By Matthew Parris
View All