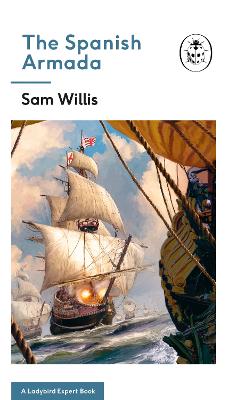 Part of the new Ladybird Expert series, The Spanish Armada is a clear, simple and entertaining introduction to King Philip II's attempt to overthrow Protestant Queen Elizabeth I and restore Catholic rule over England.

Written by award-winning British historian, archaeologist, and broadcaster Sam Willis, The Spanish Armada explores the battle that erupted up the English Channel when a Spanish fleet of 130 ships attempted to invade England.

You'll learn how religious tensions between two powerful monarchs came to a head, the innovative tactical planning of British defences, and the humanitarian disaster the conflict wrought.

» Have you read this book? We'd like to know what you think about it - write a review about Spanish Armada: A Ladybird Expert Book book by Sam Willis and you'll earn 50c in Boomerang Bucks loyalty dollars (you must be a Boomerang Books Account Holder - it's free to sign up and there are great benefits!)

Sam Willis is a historian, archaeologist and broadcaster and one of the world's leading authorities on maritime and naval history. His work takes him on adventures all over the world.

A Preview for this title is currently not available.
More Books By Sam Willis
View All