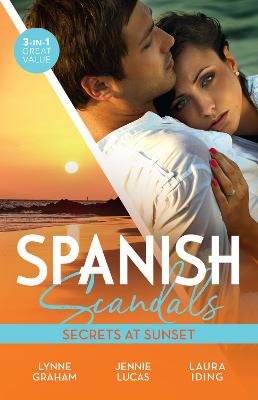 Molly isn't the kind of girl to fall for smooth-talking billionaires - it's not as if it could lead anywhere - after all, she's only a waitress. But there's something about Leandro Marques that lowers her guard and entices her to passion. Yet that night has consequences, and arrogant Leandro insists that marriage is the only option - he will legitimise his heir!

But Molly has other ideas. She has worked so hard for the little that she has, and Molly has no intention of bowing to this Billionaire's command...until juggling her new pregnancy costs her job. With nowhere left to turn, Molly must face the one man she shouldn't, the father of her child!

Waitress Belle Langtry's night of no regrets with ruthless playboy Santiago Velazquez was never meant to be more than a sinfully sweet memory. Until fate has other plans, and Belle finds herself carrying the baby she never thought possible!

Santiago has long rejected all notions of fatherhood, so Belle's news is shocking. He might refuse to trust her, but Santiago won't let Belle escape his claim - to her or their child! His plan? To bind Belle with his ring, and keep her in thrall to him with his touch!

Kat Richardson never forgot sexy Spanish surgeon Miguel, or the night they had four years ago, after which he left without trace. How could she, when their little son is his mirror image? Now, in Seville, they meet again. Passion simmers...but Kat has news for Miguel that will shift their relationship to a whole new level!

» Have you read this book? We'd like to know what you think about it - write a review about Spanish Scandals: Secrets At Sunset/The Spanish Billionaire's Pregnant Wife/Carrying the Spaniard's Child/Her Little Spanish Secret book by Lynne Graham and you'll earn 50c in Boomerang Bucks loyalty dollars (you must be a Boomerang Books Account Holder - it's free to sign up and there are great benefits!)


A Preview for this title is currently not available.
More Books By Lynne Graham
View All