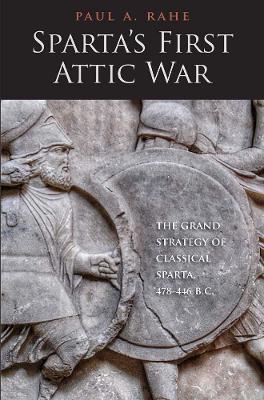 A companion volume to The Spartan Regime and The Grand Strategy of Classical Sparta that explores the collapse of the Spartan?Athenian alliance

"Provocative, intriguing and cogently argued."-David Stuttard, Classics for All

During the Persian Wars, Sparta and Athens worked in tandem to defeat what was, in terms of relative resources and power, the greatest empire in human history. For the decade and a half that followed, they continued their collaboration until a rift opened and an intense, strategic rivalry began. In a continuation of his series on ancient Sparta, noted historian Paul Rahe examines the grounds for their alliance, the reasons for its eventual collapse, and the first stage in an enduring conflict that would wreak havoc on Greece for six decades. Throughout, Rahe argues that the alliance between Sparta and Athens and their eventual rivalry were extensions of their domestic policy and that the grand strategy each articulated in the wake of the Persian Wars and the conflict that arose in due course grew out of the opposed material interests and moral imperatives inherent in their different regimes.

» Have you read this book? We'd like to know what you think about it - write a review about Sparta's First Attic War: The Grand Strategy of Classical Sparta, 478-446 B.C. book by Paul Anthony Rahe and you'll earn 50c in Boomerang Bucks loyalty dollars (you must be a Boomerang Books Account Holder - it's free to sign up and there are great benefits!)


A Preview for this title is currently not available.
More Books By Paul Anthony Rahe
View All