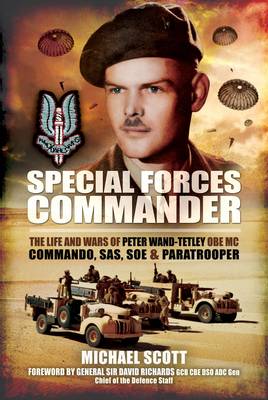 The Life and Wars of Peter Wand-Tetley MC Commando, SAS, SOE and Paratrooper

Early in the Second World War, Peter Wand-Tetley volunteered for 'special service'. He saw action first with the newly formed Commandos raiding the North African coast and then in the fierce fighting on Crete. Operations with the LRDG in the Western Desert were followed by SAS actions as Rommel retreated to Tunis. Remarkably he then transferred to the Special Operations Executive and was parachuted 'blind' into enemy occupied Greece in 1943. His role was to train and equip Andarte guerillas and his contribution and courage were recognized by the award of an immediate MC. Following victory in Europe he sailed with the Parachute Regiment to Javo where he fought in the counter-insurgency war. As well as describing his exemplary war record, Special Forces Commander covers Wand-Tetley's early life (he was a superb marksman) and his career post war in the turbulent days of the end of Empire. AUTHOR: Mike Scott is a Colonel in the British Army. He has full access to Peter Wand-Tetley's papers and has a superb knowledge of SF Operations and history. SELLING POINTS: . Action with the Commandos, Long Range Desert Group, SAS, SOE and Paras . Biography of a highly decorated Special Forces 'original' and war hero . Covers behind the lines operations in North Africa, Greece, Crete and Java . Post war Wand-Tetley served as a Colonial officer during the break-up of the Empire ILLUSTRATIONS: 16 pages of b/w plates *

» Have you read this book? We'd like to know what you think about it - write a review about Special Forces Commander book by Michael Scott and you'll earn 50c in Boomerang Bucks loyalty dollars (you must be a Boomerang Books Account Holder - it's free to sign up and there are great benefits!)


A Preview for this title is currently not available.
More Books By Michael Scott
View All