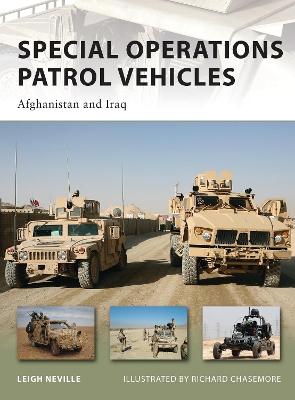 The patrol vehicles used by Special Operations Forces in Afghanistan and Iraq vary quite dramatically between the theatres as well as amongst the Coalition members, and have been developed and upgraded to meet the demands of the deployment. Covering all the major Coalition nations, Leigh Neville continues his look at the elite forces deployed in Operations Enduring Freedom and Iraqi Freedom, with this analysis of their vehicles. Tracing the evolution of the vehicle types, from their historical precedents, through their designs to their operational developments, he discusses their advantages and disadvantages, along with their tactical employment. From the mine-protected vehicles used to counter the IED threat in Iraq, the use of Strykers as armoured raiding platforms by the US Rangers, to the civilian vehicles adapted for military service by both Coalition troops and Private Military Contractors in the regions, this book uses rare in-theatre photographs and colour artwork to show the variety and inventiveness of the patrol vehicles being used in combat today.

» Have you read this book? We'd like to know what you think about it - write a review about Special Operations Patrol Vehicles book by Leigh Neville and you'll earn 50c in Boomerang Bucks loyalty dollars (you must be a Boomerang Books Account Holder - it's free to sign up and there are great benefits!)

Leigh Neville is an Australian national currently living and working in Sydney. He has travelled and worked internationally, was based in Europe for ten years, and now works for a large American consultancy; he is currently completing a Masters programme in International Studies. Richard Chasemore finished a four-year course in technical illustration in 1992. Since then he has worked on a huge variety of projects in publishing and advertising, using both traditional and digital media. He has run an airbrush course in St Louis, Missouri, and also written six educational books on digital art. He has spent 10 years working on the best-selling Star Wars Incredible Cross Sections series, which has taken him to Skywalker Ranch in California to work with the Lucasfilm concept artists. He also enjoys music and is a co-founder of Superglider Records.