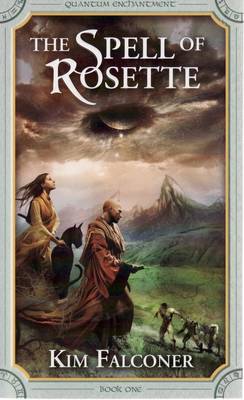 The Spell of Rosette

Description - The Spell of Rosette by Kim Falconer

A fast-paced story takes us into time and space, magic and quantum physics ...

Rosette is a child of two worlds: Gaela, steeped in magic, and an Earth choked with failing technology. the key to their survival is literally in her blood, a spell passed down through her family line to preserve the one they're sworn to protect. Unaware of her lineage, Rosette runs scared when her family is murdered. She takes refuge with Nell, a shape-shifting high priestess of the ancient blood, who teaches her the arts of witchcraft, stars and sword. Shadowed by the fabled Kreshkali, queen of the underworld and mistress of the wolf-like Lupins, Rosette and the temple cat, Drayco, find themselves little more than a step ahead of those who will do anything to control the portal that links the many-worlds. 'At last - a writer who is right up my alley. this debut novel from Kim Falconer is a magnum opus of originality and insight into Earth's technological future and occult past. this intricate and intriguing tale perfectly blends the physical, quantum, cyber and spiritual realms into one of the best fantasy books I've read in ages!' traci Harding, author of the Ancient Future

Book Reviews - The Spell of Rosette by Kim Falconer

» Have you read this book? We'd like to know what you think about it - write a review about Spell of Rosette book by Kim Falconer and you'll earn 50c in Boomerang Bucks loyalty dollars (you must be a Boomerang Books Account Holder - it's free to sign up and there are great benefits!)

Earth in the 21st Century is facing an environmental crisis. The organisation ASSIST has been formed to engage this problem. To help ASSIST is the JARROD, unfortunately for JARROD ASSIST does not like what it hears and has taken action against JARROD. The only hope lies with a Techno-Witch and a DNA splicing scientist.

Gaela is a world that's pure in its beauty and its resources. It is a world of peace with few villages and fewer cities, with small farms dotting the lands. Technology has not touched this world, but magic has. It is the perfect hiding place for a hunted technology that looks human, and is the key to saving the Earth.

Rosette is born to a world that is not her own. After a brutal tragedy leaves her alone, she decides it is too dangerous for her live. Five years later her choices will begin a chain of event that exposes everyone and their secrets. Rosette will also discover her life is not as she believed, and that although Gaela is her home, it is Earth that she must save.

The Spell Of Rosette is a epic journey. It is a science-fiction story with a future Earth, portals to other worlds, and sentient computers. It is also a fantasy story filled with magic, Lupins, talking cats, and sword fighting. Rosette has a habit of passing-out at the most inopportune of times; there's also a great deal of astrology reflecting Kim Falconer's own interests, but knowledge of this is not necessary to enjoy this spellbinding book.


A Preview for this title is currently not available.
More Books By Kim Falconer
View All