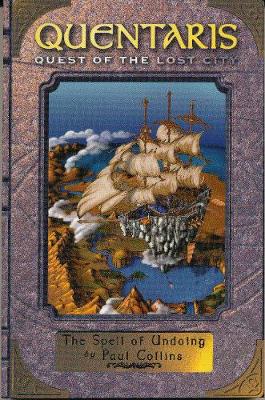 Quentaris Chronicles #2, The: Quest of the Lost City

Description - Spell of Undoing, The (Book #1) by Paul Collins

Calamity has befallen the city of Quentaris! Due to a vengeful plot by warlike Tolrush, which backfires, Quentaris is uprooted - city, cliff-face, harbour and all - and hurled into the uncharted rift-maze. Lost and adrift in this endless labyrinth of parallel universes, encountering both friend and foe and facing unknown dangers, Quentaris must somehow forge a new identity and find its way home.

But there are other surprises too. When Quentaris gets over its shock, it discovers that it's not only lost in some other universe, but now it is a floating city, adrift high above some unknown land, at the mercy of the winds.

Book Reviews - Spell of Undoing, The (Book #1) by Paul Collins

» Have you read this book? We'd like to know what you think about it - write a review about Spell of Undoing, The (Book #1) book by Paul Collins and you'll earn 50c in Boomerang Bucks loyalty dollars (you must be a Boomerang Books Account Holder - it's free to sign up and there are great benefits!)

Imagine a city wrenched, harbour and all, from the earth and flung into a void where it is destined to float from one world to another like an untethered island. Welcome to Quentaris.

More than anything orphan Tab wants to be magical. But when she is tested by the Magicians’ Guild there isn’t a scrap of magic to be found. So it comes as quite a surprise when, after being coerced by the cowardly actor Fontagu into stealing an icefire crystal, she discovers an ability to mind-meld with animals.

Fontagu flees with the crystal. Tab follows and discovers the actor’s true intention is to use the icefire to cast the spell of undoing and bring ruin to Quentaris. But the bumbling actor makes a mistake and uproots the city instead.

The industrious Quentarans soon adjust to life aboard a flying city. Giant sails are erected in order to gain control over their flight and it would seem their only real dilemma is finding the way back to their own world. But little do they realise the botched spell also caused the enemy city of Tolrush to be thrown into the void. And with murderous intent, it is closing in on Quentaris. With her new-found ability, Tab discovers Tolrush’s plot and with the aid of a friend or two (and the despicable Fontagu) sets about saving Quentaris.

The Spell of Undoing is an action-packed adventure of the highest order; the image of a flying city so seized my imagination that it stayed with me long after finishing the story. Without a doubt Collins is a master of the fantastical. His description is rich and vivid and his characters well-drawn – and at times all too real. This is essential reading for fantasy fans -- and would-be fantasy fans -- 10 to 100.

It should be noted that this is the first in the second series of Quentaris Chronicles. Series #1, which consists of 26 stand alone titles, was published by Lothian Books.

Paul has written over thirty trade books including The Jelindel Chronicles, The Earthborn Wars and titles in The Quentaris Chronicles, around 60 chapter books, both fiction and non-fiction (published both in Australia and the US), and two collections of his own stories. He co-edited four boxed sets of anthologies with Meredith Costain (Spinouts and Thrillogies), edited 11 trade anthologies and was the editor of The MUP Encyclopaedia of Australian Science Fiction and Fantasy. His websites are www.paulcollins.com.au and www.quentaris.com.

A Preview for this title is currently not available.
More Books By Paul Collins
View All