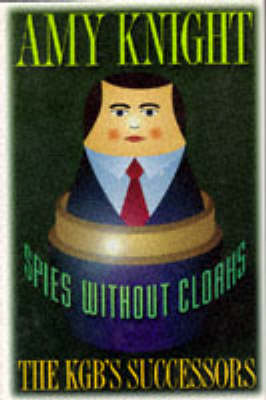 This book offers a compelling and comprehensive account of what happened to the KGB when the Soviet Union collapsed and the world's most powerful and dangerous secret police organization was uncloaked. As Amy Knight shows, the KGB was renamed and reorganized several times after it was officially disbanded in December 1991 - but it was not reformed. Knight's rich and lively narrative begins with the aborted August 1991 coup, led by KGB hard-liners, and takes us through the summer of 1995, when the Russian parliamentary elections were looming on the horizon. The failed coup attempt was a setback for the KGB because it led to demands from Russian democrats for a complete over-haul of the security services. As a result, the KGB's leaders were fired, its staff reduced, and its functions dispersed among several agencies. Even the elite foreign intelligence service was subjected to budget cuts. But President Yeltsin was reluctant to press on with reforms of the security services, because he needed their support in his struggle against mounting political opposition. Indeed, by the spring of 1995, the security services had regained much of what they had lost in the wake of the August coup. Indeed, some observers were even saying that they had acquired more power and influence than the old KGB. This story, told by one of the foremost experts on the Soviet/Russian security services and enriched by face-to-face interviews with security professionals in Moscow, is crucial to understanding Russian politics in transition. It will fascinate scholars, policymakers, and general readers interested in the fate of the KGB.

» Have you read this book? We'd like to know what you think about it - write a review about Spies without Cloaks book by Amy Knight and you'll earn 50c in Boomerang Bucks loyalty dollars (you must be a Boomerang Books Account Holder - it's free to sign up and there are great benefits!)


A Preview for this title is currently not available.
More Books By Amy Knight
View All

The Moscow Bombings of September 1999 - Examinations of Russian Terrorist Attacks at the Onset of Vladimir Putin`s Rule
$68.36 $75.95