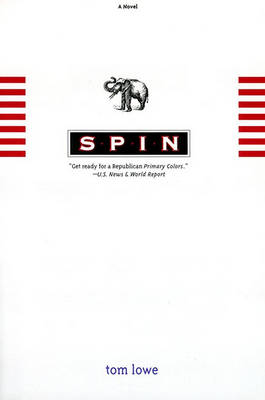 Gulf War veteran Jim Asher gets a crash course in politics, and life, when he decides to join the Senate campaign of a California business magnate. His rise within the campaign is meteoric, but his world quickly begins to collapse as the campaign fails, and Jim soon finds himself in the middle of a political shakedown that threatens to bring down the Republican machine - and land Jim in prison. Set against a backdrop of recent California politics the reader enters a world rife with scandal, conspiracy, sex and wealth. From his own experience inside the California assembly, Tom Lowe tells the tale of an up-and-coming political aide whose ambition will either launch his career or destroy everything that he believes in. Darkly humorous and often disturbing, SPIN is a must read for political enthusiasts and anyone who enjoys high-octane fiction.

» Have you read this book? We'd like to know what you think about it - write a review about Spin book by Tom Lowe and you'll earn 50c in Boomerang Bucks loyalty dollars (you must be a Boomerang Books Account Holder - it's free to sign up and there are great benefits!)

Tom Lowe worked as an aide in Michael Huffington's 1994 run for the Senate in California, and later became the youngest person ever to serve as director of public affairs for the speaker of the California Assembly. He has written for The McLaughlin Group in Washington, appeared in two Hollywood films, and fought in Operation Desert Storm. Spin is his first novel. He lives in Newport Beach, California. Tom Lowe can be reached at noveltom@earthlink.net

A Preview for this title is currently not available.
More Books By Tom Lowe
View All

A Handbook for Student Engagement in Higher Education: Theory into Practice
$249.48 $252.00