Exploring 'The Will of God'

Presents an accessible analysis of Spinoza's "Tractatus Theologico-politicus", situating the work in the context of Spinoza's general philosophy and its 17th-century historical background. According to Spinoza it is impossible for a being to be infinitely perfect and to have a legislative will. This idea, demonstrated in the "Ethics", is presupposed and further elaborated in the "Tractatus Theologico-politicus". It implies, not only that on the level of truth all revealed religion is false, but also that all authority is of human origin and that all obedience is rooted in a political structure. The consequences for "authority" as it is used in a religious context are explored: the authority of Scripture, the authority of particular interpretations of Scripture, and the authority of the Church. Verbeek also explores the work of two other philosophers of the period - Hobbes and Descartes - to highlight certain peculiarities of Spinoza's position, and to show the contrasts in theories of ideas and judgements. 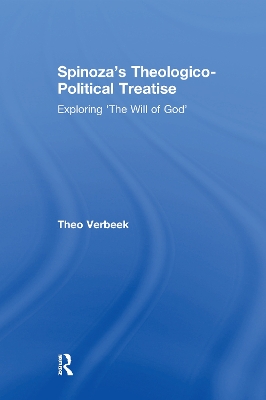 » Have you read this book? We'd like to know what you think about it - write a review about Spinoza's Theologico-Political Treatise book by Theo Verbeek and you'll earn 50c in Boomerang Bucks loyalty dollars (you must be a Boomerang Books Account Holder - it's free to sign up and there are great benefits!)

A Preview for this title is currently not available.
More Books By Theo Verbeek
View All