Spirits of the Ghan

Description - Spirits of the Ghan by Judy Nunn

Master storyteller Judy Nunn has now sold over 1 million books worldwide. In this spellbinding No.1 bestseller she takes us on a breathtaking journey deep into the red heart of Australia.

It is 2001 and as the world charges into the new Millennium, a century-old dream is about to be realised in the Red Centre of Australia- the completion of the mighty Ghan railway, a long-lived vision to create the 'backbone of the continent', a line that will finally link Adelaide with the Top End.

But construction of the final leg between Alice Springs and Darwin will not be without its complications, for much of the desert it will cross is Aboriginal land.

Hired as a negotiator, Jessica Manning must walk a delicate line to reassure the Elders their sacred sites will be protected. Will her innate understanding of the spiritual landscape, rooted in her own Arunta heritage, win their trust? It's not easy to keep the peace when Matthew Witherton and his survey team are quite literally blasting a rail corridor through the timeless land of the Never-Never.

When the paths of Jessica and Matthew finally cross, their respective cultures collide to reveal a mystery that demands attention. As they struggle against time to solve the puzzle, an ancient wrong is awakened and calls hauntingly across the vastness of the outback . . .

Other Editions - Spirits of the Ghan by Judy Nunn 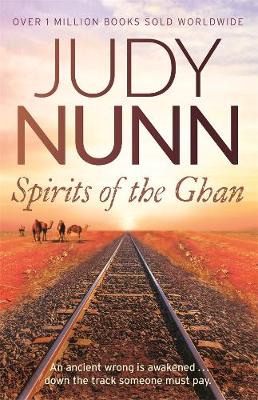 Book Reviews - Spirits of the Ghan by Judy Nunn

» Have you read this book? We'd like to know what you think about it - write a review about Spirits of the Ghan book by Judy Nunn and you'll earn 50c in Boomerang Bucks loyalty dollars (you must be a Boomerang Books Account Holder - it's free to sign up and there are great benefits!)

Judy Nunn's career has been long, illustrious and multifaceted. After combining her internationally successful acting career with scriptwriting for television and radio, Judy decided in the 90s to turn her hand to prose. Her first three novels, The Glitter Game, Centre Stage and Araluen, set respectively in the worlds of television, theatre and film, became instant bestsellers, and the rest is history, quite literally in fact. She has since developed a love of writing Australian historically-based fiction and her fame as a novelist has spread rapidly throughout Europe where she is published in English, German, French, Dutch, Czech and Spanish. Her subsequent bestsellers, Kal, Beneath the Southern Cross, Territory, Pacific, Heritage, Floodtide, Maralinga, Tiger Men, Elianne and Spirits of the Ghan confirm Judy's position as one of Australia's leading fiction writers.