They were the black sheep of aristocracy and this is their story.

They kept monkeys in West End hotels and rent boys in Deauville and Kensington. They patronised illegal gaming clubs and staged elaborate five-in-a-bed sex in stately homes. They used firearms with convincing disregard for their own and others' safety and drove their Rollses and Bentleys with apparently suicidal intent. They acquired yachts and helicopters as they shipped the family silver to California and disposed of their Old Masters at auction. They married frequently and unsatisfactorily, humiliating their wives and always witholding from them dynastic secrets of schizophrenia and insanity.

Lacking both the energy and appetite to do so, they rarely developed in their talents. Papering their lives with deceit, they sought consolation in ferocious expenditure, funding narcotic and alcohol-fuelled blowouts. They ignored the advice of sane relations, shrugged off trustees, and experimented with burglary, vagrancy and fraud. Their primary, possibly sole, accomplishment was to drag down their families with them. 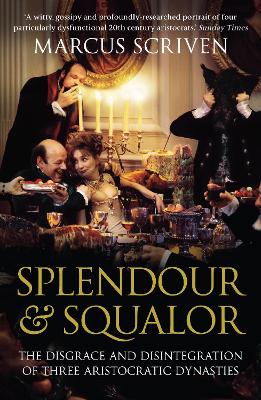 Marcus Scriven read history at Oxford before becoming a journalist, initially at the Sunday Telegraph, then at the Evening Standard. He is a leading contributor to Channel 4's documentary on Victor Hervey, 6th Marquess of Bristol, which broadcast in spring 2009. Splendour and Squalor is his first book.

A Preview for this title is currently not available.
More Books By Marcus Scriven
View All