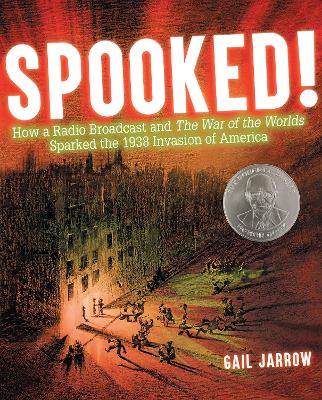 On the night of October 30, 1938, thousands of Americans panicked when they believed that Martians had invaded Earth. What appeared to be breaking news about an alien invasion was in fact a radio drama based on H. G. Wells's War of the Worlds, performed by Orson Welles and his Mercury Theatre players. Some listeners became angry once they realized they had been tricked, and the reaction to the broadcast sparked a national discussion about fake news, propaganda, and the role of radio. In this compelling nonfiction chapter book, Gail Jarrow explores the production of the broadcast, the aftermath, and the concept of fake news in the media.

» Have you read this book? We'd like to know what you think about it - write a review about Spooked! book by Gail Jarrow and you'll earn 50c in Boomerang Bucks loyalty dollars (you must be a Boomerang Books Account Holder - it's free to sign up and there are great benefits!)

Gail Jarrow is the author of many popular nonfiction books, including Red Madness, Fatal Fever, and Bubonic Panic. Her books have received numerous starred reviews, awards, and distinctions, including Best Book awards from the New York Public Library, School Library Journal, the Bulletin of the Center for Children's Books, Kirkus Reviews, and the National Science Teachers Association.

A Preview for this title is currently not available.
More Books By Gail Jarrow
View All