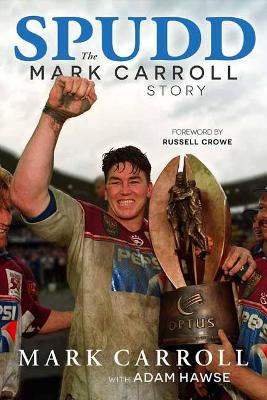 The long overdue autobiography of Mark "Spudd" Carroll is one of the most fearsome players to ever lace on a boot.

IN the brutal world of rugby league, Mark "Spudd" Carroll is one of the most fearsome players to ever lace on a boot. An enforcer who would do everything in his power to ensure victory for his team - including a pre-game ritual of eating 16 potatoes, hence the nickname.
Spudd is from a rugged era where, even if concussed, players climbed to their feet and threw themselves back into the fray. In stints with the Panthers, Rabbitohs and Sea Eagles, his search-and-destroy missions each weekend made his matches compulsory viewing. In particular, his brutal encounters with Newcastle rival Paul "Chief" Harragon are legendary and have been viewed across the globe. In SPUDD, both men lift the lid on their volatile relationship, including the day they refused to room with each other when selected for the NSW State of Origin team.

Carroll's career at the elite level spanned over a decade, between 1987 and 1999, and included more than 200 games. He played in three grand finals, tasting premiership success with Manly in 1996 under his mentor and Rugby League Immortal Bob Fulton. He played seven State of Origin matches for NSW, winning a series in 1997. He played 12 Test matches for Australia and was part of the team that won the World Cup at London's famous Wembley Stadium in 1995.

Carroll's tough reputation is matched only by his honesty. Spudd calls it as he sees it and doesn't care who he upsets in the process. These qualities caught the eye of actor Russell Crowe, who hired Carroll as his trainer for more than eight years. Spudd's job was to whip the Oscar-winner into shape for upcoming movie roles. The duo was famous for their heated backyard footy battles, which once left Crowe with a serious leg injury. They remain firm friends.

» Have you read this book? We'd like to know what you think about it - write a review about Spudd: The Autobiography book by Adam Hawse and you'll earn 50c in Boomerang Bucks loyalty dollars (you must be a Boomerang Books Account Holder - it's free to sign up and there are great benefits!)