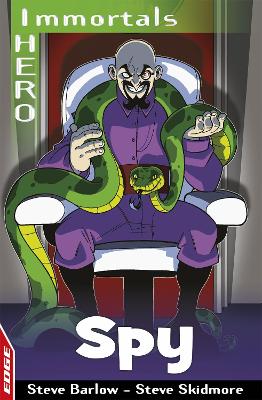 YOU are a spy codenamed Scorpio. Arch-villain Sebastien Mammon has seized control of laser satellites orbiting the Earth. He's going to destroy key capital cities, starting with London, if you don't stop him...This is a title in the interactive I HERO Immortals series - where the reader is the hero! In each adventure the reader makes a choice that affects how the story progresses - it really is 'decide-your-own-destiny!Written by the award-winning duo Steve Barlow and Steve Skidmore (more commonly known as the 2Steves), and illustrated by comics legend, Jack Lawrence. Age appropriate for 6 to 8 year olds and more sensitive readers. Also suitable for reluctant readers and less confident older readers. Printed using a font approved by the British Dyslexia Association.

» Have you read this book? We'd like to know what you think about it - write a review about Spy book by Steve Barlow and you'll earn 50c in Boomerang Bucks loyalty dollars (you must be a Boomerang Books Account Holder - it's free to sign up and there are great benefits!)

Steve Barlow studied at Warwick University and Nottingham University, and worked at various times as a teacher, actor, stage manager and puppeteer. Then he went to teach in Botswana, where a valid excuse for students not handing in their homework was 'A goat ate it, sir!'. On his return to the UK he met Steve Skidmore, and the rest is hysteria. Steve Skidmore is shorter than Steve Barlow and less hairy. He went to Nottingham University to supposedly read English, but spent most of his time playing sport and doing a variety of summer jobs including counting pastry pie lids (yes, really). He trained as a teacher of Drama, English and Film studies, before teaming up with Steve Barlow to become a full time author.