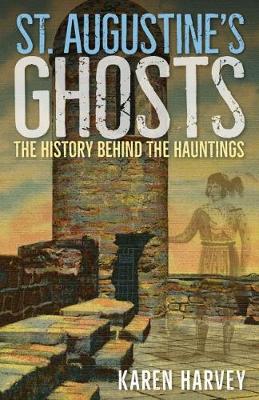 St. Augustine's Ghosts: The History behind the Hauntings

Description - St. Augustine's Ghosts: The History behind the Hauntings by Karen Harvey

Prepare for a scare in America's oldest city.

It wasn't the mysterious smells that put Minorcan Kenny Beeson over the edge. Nor was it the sounds of booted feet stamping across the floor or the ship's bell that rang when no one entered the shop door. No, it was when his friend died in the 1960s, and he couldn't banish the spirits from his shop.

Then he suddenly felt a chill. He shivered and looked at the lady. Her long skirt was blowing in the breeze and hanging fabric was flapping over the bushes. Garrett knew there was no wind stirring the air. Certain by then he was seeing a ghost, Garrett dropped his sack of garbage and backed away.

From doomed pirates to mischievous soldiers to spectral nuns, this collection of 38 spine-chilling tales features famous spirits from St. Augustine's legendary paranormal past.

These stories are set in the city's iconic cemeteries, courtyards, and houses, including many sites along St. George Street, one of the oldest streets in the United States. Here you will find the exorcism of evil spirits from a man who became the city's mayor; the head of a Seminole warrior rising like the moon above the Castillo de San Marcos; restless ghosts lurking in hallways; eerie lights inside a mausoleum; a bishop's exploding casket; and a lighthouse keeper whose voice can still be heard in the wind.

Today, visitors flock to the beachside city to enjoy spooky ghost tours and stay in haunted bed-and-breakfast inns. The stories they hear capture the rich history of the city and those who have inhabited it. St. Augustine's ghosts have deep roots in Spanish lore dating back to the founding of the city in 1565 and in the culture of immigrants from the Mediterranean island of Minorca who were brought to Florida as indentured servants in 1768.

Retelling the most mysterious encounters and sightings that have been passed down for generations among residents of St. Augustine, Karen Harvey invites you to explore the quaint brick streets of the nation's oldest city for yourself. Who knows what you might discover?

Book Reviews - St. Augustine's Ghosts: The History behind the Hauntings by Karen Harvey

» Have you read this book? We'd like to know what you think about it - write a review about St. Augustine's Ghosts: The History behind the Hauntings book by Karen Harvey and you'll earn 50c in Boomerang Bucks loyalty dollars (you must be a Boomerang Books Account Holder - it's free to sign up and there are great benefits!)

A Preview for this title is currently not available.
More Books By Karen Harvey
View All