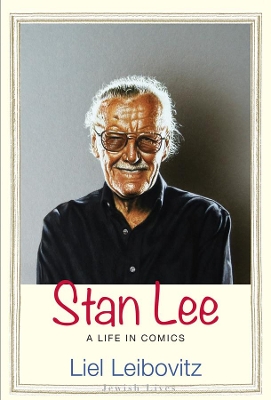 Stan Lee: A Life in Comics

Description - Stan Lee: A Life in Comics by Liel Leibovitz

From the prizewinning Jewish Lives series, a meditation on the deeply Jewish and surprisingly spiritual roots of Stan Lee and Marvel Comics

Few artists have had as much of an impact on American popular culture as Stan Lee. The characters he created-Spider-Man and Iron Man, the X-Men and the Fantastic Four-occupy Hollywood's imagination and production schedules, generate billions at the box office, and come as close as anything we have to a shared American mythology.

This illuminating biography focuses as much on Lee's ideas as it does on his unlikely rise to stardom. It surveys his cultural and religious upbringing and draws surprising connections between celebrated comic book heroes and the ancient tales of the Bible, the Talmud, and Jewish mysticism. Was Spider-Man just a reincarnation of Cain? Is the Incredible Hulk simply Adam by another name? From close readings of Lee's work to little-known anecdotes from Marvel's history, the book paints a portrait of Lee that goes much deeper than one of his signature onscreen cameos.

Jewish Lives is a prizewinning series of interpretative biography designed to explore the many facets of Jewish identity. Individual volumes illuminate the imprint of Jewish figures upon literature, religion, philosophy, politics, cultural and economic life, and the arts and sciences. Subjects are paired with authors to elicit lively, deeply informed books that explore the range and depth of the Jewish experience from antiquity to the present.

In 2014, the Jewish Book Council named Jewish Lives the winner of its Jewish Book of the Year Award, the first series ever to receive this award.

» Have you read this book? We'd like to know what you think about it - write a review about Stan Lee: A Life in Comics book by Liel Leibovitz and you'll earn 50c in Boomerang Bucks loyalty dollars (you must be a Boomerang Books Account Holder - it's free to sign up and there are great benefits!)

A Preview for this title is currently not available.
More Books By Liel Leibovitz
View All

The The Newish Jewish Encyclopedia: From Abraham to Zabar's and Everything in Between
$75.92 $84.35