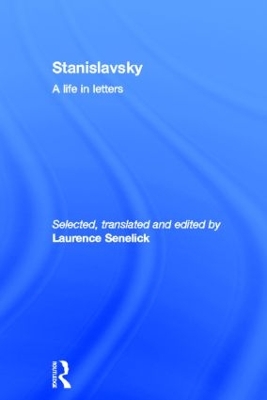 Stanislavsky: A Life in Letters

Description - Stanislavsky: A Life in Letters by Laurence Senelick

Konstantin Stanislavsky transformed theatre in the West and was indisputably one of the twentieth century's greatest innovators. His life and work mark some of the most significant artistic and political milestones of that tumultuous century, from the emancipation of the serfs to the Russian Revolution. Little wonder, then, that his correspondence contains gripping exchanges with the famous and infamous of his day: men such as Tolstoy, Chekhov, Trotsky and Stalin, among others.

Laurence Senelick, one of the world's foremost scholars of Russian literature, mines the Moscow archives and the definitive Russian edition of Stanislavsky's letters, to produce the fullest collection of the letters in any language other than Russian. He sheds new light on this fascinating field. Senelick takes us from the earliest extant letter of an eleven-year-old Konstantin in 1874, through his work as actor, director and actor trainer with the Moscow Art Theatre, to messages written just before his death in 1938 at the age of seventy-five.

We discover Stanislavsky as son, brother and father, as lover and husband, as businessman and "internal emigre." He is seen as a wealthy tourist and an impoverished touring actor, a privileged subject of the Tsar and a harried victim of the Bolsheviks.

Senelick shares key insights into Stanislavsky's work on such important productions as The Seagull, The Cherry Orchard, Hamlet, Othello, and The Marriage of Figaro. The letters also reveal the steps that led up to the publication of his writings My Life in Art and An Actor's Work on Himself. This handsome edition is also comprehensively annotated and fully illustrated.

Other Editions - Stanislavsky: A Life in Letters by Laurence Senelick Book Reviews - Stanislavsky: A Life in Letters by Laurence Senelick

» Have you read this book? We'd like to know what you think about it - write a review about Stanislavsky: A Life in Letters book by Laurence Senelick and you'll earn 50c in Boomerang Bucks loyalty dollars (you must be a Boomerang Books Account Holder - it's free to sign up and there are great benefits!)

Laurence Senelick is Fletcher Professor of Drama at Tufts University and a Fellow of the American Academy of Arts and Sciences. His many books include Russian Dramatic Theory from Pushkin to the Symbolists; Gordon Craig's Moscow Hamlet; The Chekhov Theatre: A Century of the Plays in Performance; and A Historical Dictionary of Russian Theatre. He has been awarded the St George medal of the Russian Ministry of Culture for contributions to Russian art and scholarship.

A Preview for this title is currently not available.
More Books By Laurence Senelick
View All