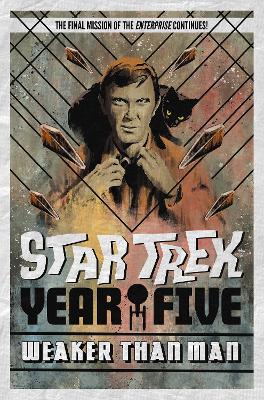 Join the crew of the original Starship Enterprise in these all-new adventures near the end of their five-year mission.

The Enterprise and her crew finally make it back to Federation space, but the Federation they find isn't quite the same as the one they had left behind! Kirk grapples with a very personal Klingon threat, even as the Enterprise begins its homecoming victory tour, and the Federation's upcoming presidential election is upended when Harry Mudd enters the race!

All this against the backdrop of a sinister malaise threatening to rot the Federation from within. Terrible secrets are revealed, among them the origin of Gary Seven and the grand designs of the shadowy AEGIS organization. Can Kirk and the Enterprise crew excise this corruption, or will the five-year mission end in failure?

» Have you read this book? We'd like to know what you think about it - write a review about Star Trek: Year Five - Weaker Than Man: Book 3 book by Jackson Lanzing and you'll earn 50c in Boomerang Bucks loyalty dollars (you must be a Boomerang Books Account Holder - it's free to sign up and there are great benefits!)


A Preview for this title is currently not available.
More Books By Jackson Lanzing
View All