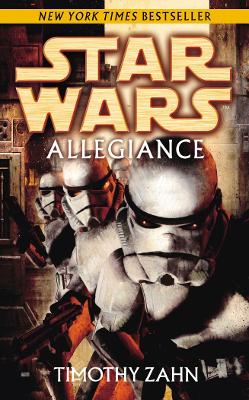 A Star Wars novel set between the events of Epsiode IV- A New Hope and Epsiode V- The Empire Strikes Back, it features a younger Han, Leia, and Luke, as well as Mara Jade.Mara Jade, the Emperor's Hand, is looking into the illicit financial affairs of a planetary governor, hoping to find evidence that he might be funding the Rebellion. Luke, Han, and Chewbacca are sent on a mission to help some rebel supporters. Leia is busy being a diplomat, trying to drum up support for the Rebel Alliance. And a band of 5 stormtroopers, on the run after refusing a direct order, finds itself in the strange position of doing good deeds...and perhaps even aiding the Rebellion.The paths of all of them will crisscross back and forth as they come closer and closer to meeting up with one another...but never quite managing to.

» Have you read this book? We'd like to know what you think about it - write a review about Star Wars: Allegiance book by Timothy Zahn and you'll earn 50c in Boomerang Bucks loyalty dollars (you must be a Boomerang Books Account Holder - it's free to sign up and there are great benefits!)

Timothy Zahn has been writing science fiction since 1975. Since then he has published nearly seventy short stories and novelettes, nineteen novels, and three short fiction collections. He is best known for his five Star Wars books (Heir to the Empire, Dark Force Rising, The Last Command, Specter of the Past, and Vision of the Future). He has a B.S. in physics from Michigan State University, and an M.S. in physics from the University of Illinois. He lives with his family on the Oregon coast.