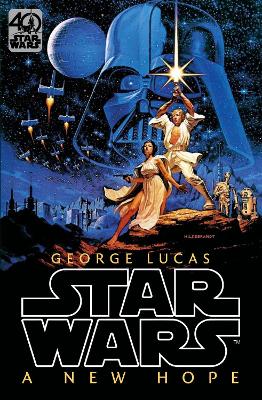 The classic adventure that started it all - published for the first time in hardback and eBook.

Luke Skywalker was a twenty-year-old who lived and worked on his uncle's farm on the remote planet of Tatooine...and he was bored beyond belief. He yearned for adventures that would take him beyond the farthest galaxies. But he got much more than he bargained for....

Rediscover the classic adventure with this 40th Anniversary special ediion, published for the first time in hardback with the original film artwork.

» Have you read this book? We'd like to know what you think about it - write a review about Star Wars: Episode IV: A New Hope book by George Lucas and you'll earn 50c in Boomerang Bucks loyalty dollars (you must be a Boomerang Books Account Holder - it's free to sign up and there are great benefits!)