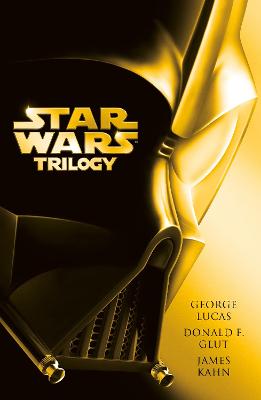 Read the story of the movies in one complete volume - and rediscover the wonder of the legend.

Luke Skywalker dreamed of adventures out among the stars and alien worlds. But when he intercepted a message from a beautiful captive princess, he got more than he had bargained for-and that was how the adventure of his life began. . . .

Forty years after the groundbreaking movie Star Wars- A New Hope first hit the silver screen, Star Wars remains one of the most beloved sagas ever told. Together, the three original Star Wars movies A New Hope, The Empire Strikes Back, and Return of the Jedi told one epic- a heroic tale of innocence lost and wisdom gained, of downfall and redemption, of the never-ending fight between the forces of good and evil. Read the story of the movies in one paperback volume and rediscover the wonder of the legend that begins-

» Have you read this book? We'd like to know what you think about it - write a review about Star Wars: Original Trilogy book by George Lucas and you'll earn 50c in Boomerang Bucks loyalty dollars (you must be a Boomerang Books Account Holder - it's free to sign up and there are great benefits!)