Description - The Star by Felicity Marshall

The Star reflects the contemporary phenomenon of "fame without substance", a part of our celebrity-soaked culture.

Marion, a wooden doll, her friend Harley and their dog Polka, enter the imaginary World of Fame where Marion becomes a glamorous Star. But she learns painfully that stardom has a use-by-date. Her experience changes her forever but her true friends still love her.

The story explores the superficiality of stardom and the value of true friendship.

Other Editions - The Star by Felicity Marshall 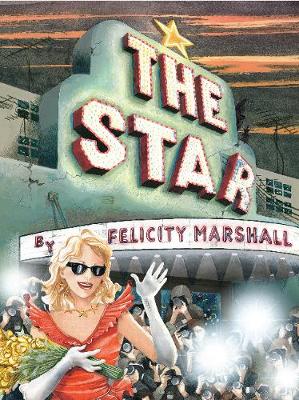 » Have you read this book? We'd like to know what you think about it - write a review about Star book by Felicity Marshall and you'll earn 50c in Boomerang Bucks loyalty dollars (you must be a Boomerang Books Account Holder - it's free to sign up and there are great benefits!)

Marion is a puppet longing for adventure. Her best friends, Harley and Polka are happy with life as it is. The predator arrives in the guise of beauty and innocence. He appeals to Marion’s longing by a profusion of compliments about her ability to become a star.

But Harley and Polka think she’s already a star; perfect the way she is. Marion is beguiled by the convincing promises. The smiling master controller waits in the background. The transition from one world to another is instantaneous. Marion is introduced to important people who can ‘pull strings’ for her; a metaphor of great significance throughout the book. She is trained by the bird to sing and by the bear to dance. The important people build her up and demand that she change who she is to become who they want her to be. They create the perfect image.

Now she is a Star with a bridge and perfume that carry her name. Marion dolls circulate. She has a private secretary, a dress designer, make-up artist and hairdresser, but no room for Harley and Polka in her life. They are now ‘forgotten souls’. Her strings are pulled by the master controller. Until…

Wear and tear from the dazzling life destroys her perfection. Her team of creators has disappeared. Marion begs her old friends to help to restore her image. Harley works tirelessly but her used-by date has come and gone. She has been replaced by another disposable star that will in turn be discarded and left shattered. She returns to the friends who loved her just the way she was.

Strong metaphors are used to address themes of friendship, loyalty, loss of identity, control, and the power of persuasion. It is an analogy of how people prey on, use, then discard, one another, all for material or personal gain. A powerful book in the category of Margaret Wild’s, Fox. The text is superbly in tune with the outstanding illustrations. It is suited to readers from adult to primary school age.

‘The Star’ is a star. The cover ‘grabs’ you with energy, colour, light and the excitement of fame. Felicity Marshall is a fine artist as well as a gifted illustrator. This is evident as soon as you open the book. Even the end pages are filled with images engendering exploration and interest. Throughout the book, the illustrations continue to engage with complex, intricate, images of broken dolls, desolate landscapes, starry lights and much more. The book is a visual delight holding themes of identity and search for young people’s place in the world.

The story is a parable of the hollow search for fame, stardom and adoration. A star, despite all the accolades of fans and materialism of wealth, is dispensable. Real friends are not. In the end, you are who you are, and those who matter in your life love that person, called ‘you’ and the ‘special glue that holds you together’.

This older picture book engages readers in the rich illustrations and accessible storyline, promoting discussion and challenging the modern obsession with fame. While a trade book, it also is ideal for upper primary and lower secondary schools as a stimulus to engaging in important youth questions – ‘Who we are? What we want to be?

However, my advice is, that whatever age you are, open ‘The Star’ and feast on the artwork.

With our TVs sprouting instant stars almost daily with such shows as: Australian Idol, So You Think You Can Dance and Australia’s Got Talent, is it any wonder today’s kids crave the limelight? The Star is a timely tale that addresses the reality of fame and shows readers just how one dimensional and fleeting it can be.

Marion has all she can want in friends, Harley and Polka, but she wants more. She wants adventure. She wants fame. So when she finds herself plucked from her quiet life and presented to the man in the hat who promises her the world, she is thrilled beyond imagining. Marion is taught to dance and sing, she is primped and snipped and pressed and before she knows it she is a star! Gone is her old life and gone are her friends. But before long fame takes its toll and Marion begins to fade, her paint to flake. Only now does she remember Harley and Polka, but they are nowhere to be found. What Marion doesn’t realise is that she is destined for the rubbish heap. Already the man in the hat is searching for his new star.

Once again Ford Street has chosen the road less travelled by releasing a picture book for older readers. But don’t be fooled; this story is no less potent for its compact size. The Star is a modern Pinocchio, with the same sinister undertone as the classic.

Marshall’s artwork is detailed and attention-grabbing—particularly the black and white illustrations highlighted with significant splashes of colour. Marshall holds an honours degree in fine arts, has exhibited her work in France and London, and has been short listed for the Chrichton and Western Australian Premier’s awards. Her other published titles include: Sage’s Ark, and You and Me Murrawee.

Although touted for kids 10+, I can see younger children, particularly girls being drawn to this title. The Star is well-written and well-told, but while the dangers of stardom are certainly noteworthy, I do hope kids won’t be put off these aspirations altogether. After all, a life lived without dreams is a life only half-lived.

Felicity Marshall is an Australian author/illustrator with an honours degree in Fine Arts who has exhibited in Australia, UK and France. She has worked in film production for 17 years. Her published books are You and Me Murrawee (shortlisted Crichton Award for Illustration) and Sage's Ark (shortlisted Premier's Book Awards).

A Preview for this title is currently not available.
More Books By Felicity Marshall
View All