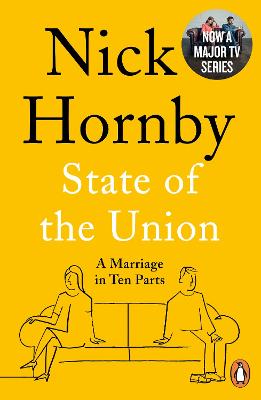 State of the Union: A Marriage in Ten Parts

Description - State of the Union: A Marriage in Ten Parts by Nick Hornby

Tom and Louise meet in the pub opposite their counsellor's office ten minutes before their session is about to start. Their marriage is in a state of crisis because Louise has been unfaithful, after a long period in which Tom wasn't interested in having sex with her at all.

The plan in these ten minutes is to talk about the agenda for the session, what they talked about last week, what they never talk about, and what is wrong with the couple whose counselling slot immediately precedes their own. Frequently they talk about things that are really not important to their difficulties but which animate and provoke them anyway.

In this way, we learn about the history and the future of a marriage. Anyone who has ever been in a relationship made more complicated by time, and familiarity, will recognise themselves in this brilliantly funny comedy written by one of our most beloved writers,one who captures relationships like few others.

Buy State of the Union: A Marriage in Ten Parts by Nick Hornby from Australia's Online Independent Bookstore, Boomerang Books.

Book Reviews - State of the Union: A Marriage in Ten Parts by Nick Hornby

» Have you read this book? We'd like to know what you think about it - write a review about State of the Union: A Marriage in Ten Parts book by Nick Hornby and you'll earn 50c in Boomerang Bucks loyalty dollars (you must be a Boomerang Books Account Holder - it's free to sign up and there are great benefits!)

Book Review: State of the Union: A Marriage in Ten Parts by Nick Hornby - Reviewed by CloggieA (08 Sep 2019)

5 stars State of the Union is the eighth novel by award-winning British author and Bafta winner, Nick Hornby. Tom and Louise are having marital therapy. The state of their marriage is the result of a number of things including, but not limited to, “a spot of infidelity”. Tom is an unemployed music critic; Louise is a gerontologist; they meet at the pub across the road from the counsellor’s rooms before each session.

Over an ale (Tom) or a white wine (Louise), they talk about what they will or won’t be discussing with their therapist, Kenyon; they examine their marriage and wonder if therapy can repair the damage; they talk about what went on in the previous session; and, as they watch them exit the rooms and sometimes enter the pub, they speculate on the lives of the couple whose session precedes theirs. Each of the ten chapters covers one such encounter at the pub.

Some readers may find this little book difficult to read. The problem won’t be the issues raised, although they can be thought-provoking. Rather, it’s that the reader will often be laughing so much that tears fill the eyes, and make it hard to focus on the print. Thus the standard warning about reading the book in the Quiet Carriage on Public Transport, where other commuters may be disturbed by readers rolling on the floor laughing. Those with continence issues should also consider themselves forewarned.

But for all that humour, there's wisdom and insight too. Much of the conversation between Tom and Louise will instantly strike a chord with married couples of a certain vintage. Tom manages to tie himself into several conversational knots. Brexit somehow gets in there, as does the possible gender bias of the counsellor, the offending lover, a fake cast, online dating, crosswords, sex, Rupert Murdoch and imaginary future partners. Apparently it's now a TV series: it would definitely translate well to the screen, so that is worth researching. A very entertaining read. This unbiased review is from an uncorrected proof copy provided by Penguin Random House.


A Preview for this title is currently not available.
More Books By Nick Hornby
View All

Just Like You: Two opposites fall unexpectedly in love in this pin-sharp, brilliantly funny book from the bestselling author of About a Boy
$18.39 $22.99