The Statute of Liberty

A British Bill of Rights

Description - The Statute of Liberty by Geoffrey Robertson

The year 2016 will go down in history, if the government has its way, as the year in which Britain gained its own Bill of Rights. That is what David Cameron promised at Runnymede in June - "a new version of Magna Carta". Make no mistake, this is a momentous undertaking. What makes it all the more mysterious is that the government is now promising a British Bill without disclosing what 'rights' it will contain. It says it will produce a Green Paper in December, and allow only three months for consultation over our new "British" rights. Geoffrey Robertson thinks that this is a strange way to proceed, and risks damaging liberties that we have enjoyed for centuries. It may also abolish some rights in the European Convention that are regarded as universal. But on the other hand, Britain is the only country in Europe which does not have its own Bill of Rights - so might the government's initiative be turned into something worthwhile? Geoffrey Robertson believes - and in this book he proves - that a British Bill of Rights is essential to restoring pride and faith in British law, and to educating our children so they can understand their birthrights.The European Convention, with its weasel-worded Europrose, can never be regarded as a substitute for hard won human rights.
However, this government has no understanding of civil liberties and is planning to weaken them. The book will explain how a true "British" Bill of Rights would work to entrench our liberties, and to help create the culture of liberty that is lacking in modern Britain. It would serve as a powerful symbol of the UK's identity and values. The result is dazzling: a comprehensive act definitively enshrining our rights and freedoms into British law.

Other Editions - The Statute of Liberty by Geoffrey Robertson 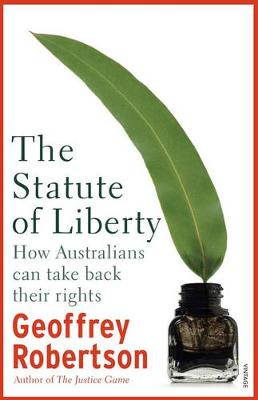 Book Reviews - The Statute of Liberty by Geoffrey Robertson

» Have you read this book? We'd like to know what you think about it - write a review about Statute of Liberty book by Geoffrey Robertson and you'll earn 50c in Boomerang Bucks loyalty dollars (you must be a Boomerang Books Account Holder - it's free to sign up and there are great benefits!)

Geoffrey Robertson QC is founder and head of Doughty Street Chambers, the UK's leading human rights legal practice. He is the acclaimed author of An Inconvenient Genocide: Who Now Remembers the Armenians?, Stephen Ward Was Innocent, OK, Crimes Against Humanity: The Struggle for Global Justice, The Justice Game and Mullahs without Mercy: Human Rights and Nuclear Weapons, among others.