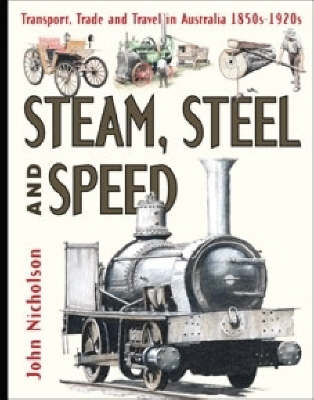 How did steam power change Australia?

In this book, you can read about

* paddle steamers trading up and down the nation's waterways

* the Hobnail Express, the Tea-and-Sugar Train and the Railway Songster

In the fourth book in his impressive series, award-winning author John Nicholson shows how the miracle of steam power brought Australia into the mechanical age.

The Trade, Transport and Travel series:

» Have you read this book? We'd like to know what you think about it - write a review about Steam, Steel and Speed book by John Nicholson and you'll earn 50c in Boomerang Bucks loyalty dollars (you must be a Boomerang Books Account Holder - it's free to sign up and there are great benefits!)

John Nicholson’s fourth offering in the ‘Transport, Trade and Travel’ series—Steam, Steel and Speed would make an excellent resource for teachers and students alike, to find out about the Australian ‘industrial revolution’ from the 1850s to the 1920s. It covers how steam engines work, the advent of modern technology, the river trade and working for the railways. The illustrations are detailed and engaging and the text easy to understand. Learn about the Harry Potter-sounding ‘Hobnail Express’ and the ‘Tea and Sugar Train’. The book is aimed at the nine to 13-year-old age bracket and us sure to invoke interest in the budding train driver/boat enthusiast. Want to know what the most common injury to rail workers was? What a drover’s routine entailed, or what a fettler is? These questions and more are answered in a straightforward, matter-offact way. The next book in the series covers the years of 1900 to 2000 and the theme is on petrol power— lets hope A&U publishes it before the world runs out! A solid, informative read.

John Nicholson is an award-winning author with a passion for the built and natural environment and its impact on human society and history. He originally trained as an architect and has built his own environment-friendly home in the Australian bush. He relishes the detailed research that goes into his books. He is renowned for his attractive and accurate illustration of the world around us. Many of John Nicholson's books have been shortlisted in the Children's Book Council Book of the Year Awards. Four of them, A Home among the Gum Trees , The First Fleet , Fishing for Islands and Animal Architects , have won the Eve Pownall Award for Information Books. The first book in the present series, Songlines and Stone Axes , won the young people's history prize in the New South Wales Premier's Awards of 2007.

A Preview for this title is currently not available.
More Books By John Nicholson
View All