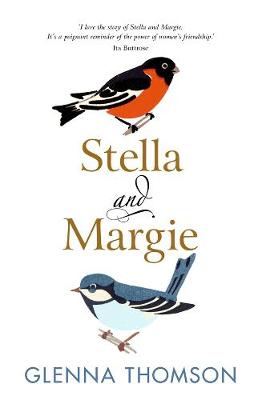 Stella and Margie is a piercingly insightful novel about love and duty, acceptance and reconciliation, and of a touching friendship that crosses the generations.

A beautiful novel about two women - a generation apart - thrown together by circumstance, who slowly come to love and understand one another.

Stella and her mother-in-law Margie are two very different women.

Stella is kind, compassionate and just a little chaotic. Margie is prickly, demanding and a stickler for convention. Stella has exciting dreams for the future. Margie has only bitter memories of the past.

When Margie needs help recovering from a major operation, Stella offers her a place to stay. With no other options, Margie returns to the family farm where for decades, until Stella's arrival, she was the one in charge.

Margie has never made life easy for her daughter-in-law, and that's not going to change now she's been made a guest in her former home.

But as the dry summer turns to a beautiful autumn, the two women gradually form an unlikely bond, as the ambitions, secrets, and tragedies that have shaped their lives are slowly uncovered...

"I love the story of Stella and Margie. It's a poignant reminder of the power of women's friendship." Ita Buttrose

"A beautiful story about the value of female relationships, the visual imagery is superb... Simple story, stellar read." Herald Sun

"A warm and contemporary exploration of the complexities of women's lives and their relationships, love and duty, ambition and the weight of generational expectation, set against the dusty, stunning backdrop of outback Australia." Courier Mail

Other Editions - Stella and Margie by Glenna Thomson 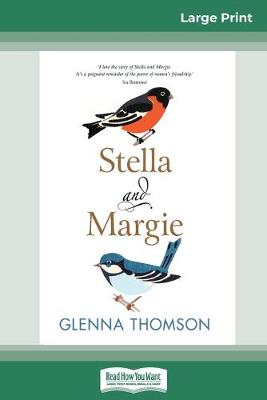 » Have you read this book? We'd like to know what you think about it - write a review about Stella and Margie book by Glenna Thomson and you'll earn 50c in Boomerang Bucks loyalty dollars (you must be a Boomerang Books Account Holder - it's free to sign up and there are great benefits!)

5 stars Stella and Margie is the second novel by Australian author, Glenna Thomson. Stella Adams has always known that she did not meet her mother-in-law’s approval: Margie Ballantine was never more than civil to her. But now Margie, turning eighty, is in hospital, recovering from a broken leg. Arriving with cake and cards, Stella, Ross and their daughters learn that the rehab has no vacancy. Stella, always generous to a fault, suggests Margie live with them on the family farm, Maryhill, until she can go home. Ross is less than happy, and Margie only grudgingly agrees.

While Ross busies himself with the farm, aspiring playwright Stella is frantically trying to get government funding for her amateur theatre group’s production of her first play. This, on top of the everyday chores of the farm wife and mother. Stella’s management style and her priorities are not Margie’s, who observes it all and generally disapproves: she’d curt, critical and cranky. And Margie so stubbornly refuses to articulate her own needs and wants that it is nothing short of a miracle that Stella is not more exasperated.

As the weeks progress, Margie’s behaviour causes friction between Ross and Stella, whose marriage is usually happy and content: Ross resents his mother’s lack of respect for Stella and thinks Stella is being far too kind; Stella believes Ross could show his mother more love and tenderness. Gradually, past events, long-buried, and secrets, long-guarded, are revealed. While it is true that Margie has not had an easy life, she seems intent on making herself difficult to like, let alone love, and stiffly resists attempts at affection.

Thomson gives the reader a plot that is realistic and not wholly predictable. Her characters are much more than one-dimensional and their dialogue is easily credible. The dual narrative works well, presenting incidents from two vastly different perspectives. The story touches on domestic violence, succession plans, and patriarchy; adultery, grief, and the conflict between doing one’s duty and following one’s aspirations, also feature. Thomson’s descriptive prose is quite evocative, and the birds are a delightful bonus. This is a heart-warming novel that will stay with the reader long after the last page is turned.

Glenna Thomson lives in north-east Victoria on a cattle property. She portrays her experiences on the farm, and in her extensive garden, vividly in her writing. For several years, Glenna and her husband also managed a commercial blueberry orchard, which inspired her first novel Blueberry. Glenna grew up on an apple orchard, married, had children, and before moving to the country she developed a career in overseas aid and business. Stella and Margie, her second novel, will be released in January 2018.

A Preview for this title is currently not available.
More Books By Glenna Thomson
View All