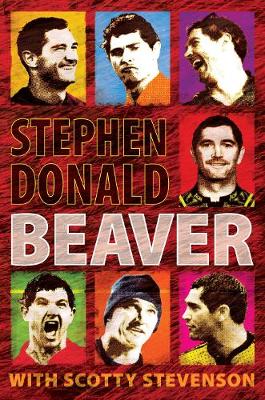 Stephen Donald etched himself into All Blacks folklore with that 'kick' in the 2011 Rugby World Cup final at Eden Park. Donald, one of the country's most popular All Blacks, had not originally been wanted for the World Cup squad. He was whitebaiting in the Waikato and effectively off the rugby grid when the SOS went out for his services. The rest, as they say, is history. That one penalty goal in the final has ensured him a special place in All Blacks history. Now, Donald is combining with the hugely talented rugby writer and commentator Scotty 'Sumo' Stevenson in a book which will cover not only Donald's sporting career and his part in the All Blacks' historic Cup win, but also poke the borax at both himself and his team mates. Stevenson's unique brand of humour - he collaborated with Cory Jane on the screaming funny Cory Jane: Winging It - will ensure Beaver's book will be one to be both remembered and most feared (especially if you're a high profile teammate!)

» Have you read this book? We'd like to know what you think about it - write a review about Stephen Donald - Beaver book by Scotty Stevenson and you'll earn 50c in Boomerang Bucks loyalty dollars (you must be a Boomerang Books Account Holder - it's free to sign up and there are great benefits!)

Broadcaster and writer Scotty Stevenson joined SKY Sport in 2007 and has refused to leave. Rugby has been his passion and he continues to work as a commentator, reporter and presenter for New Zealand's national obsession. He has also covered the Olympic Games, Olympic Winter Games and Commonwealth Games. Scotty was appointed Editor of SKY Sport - The Magazine in 2011, and was named New Zealand Magazine Sport Feature Writer of the Year in 2012. Scotty is also a weekly columnist for The Spinoff. He has written two best-selling sports books, Cory Jane: Winging It (2015) and The Kiwi Pair (with Hamish Bond and Eric Murray, 2016).

A Preview for this title is currently not available.
More Books By Scotty Stevenson
View All